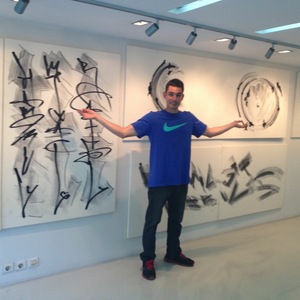 My art is the confession of my soul, because I express the things I cannot say to others.
The markers in my hands are the medium to convey this; I hold them tight and live my personal truth through the traces I leave.”

I have participated in biennales and large-scale exhibitions in Greece and abroad. I create works on paper with markers and felt-tip pens, painting installations, artists books, and multiples.

Aristotelis Deligiannidis had already participated in Open one year before, following invitation by the Greek commissioner, Christos Savvidis (ArtBOX.gr). The art work produced on that occasion was later donated to Lido's Public Library. During Open 2010, while the work is still standing at its original location in anticipation of its transfer, the artist is invited back, to revisit the art work (click on the link below for more details on Open 2009).
Aristotelis Deligiannidis’s cross-shaped plexiglas construction/installation bears traces and graphics in black and white. It is still standing, one year later, at the outdoors location where it was initially installed on the occasion of Open 12.
Before the work’s transportation and installation at its final location (Lido’s new public library), the artist will rework it, adding colour through his intense painterly gesture. The goal is not to fill in the gaps, the surfaces untouched by the artist’s writing on the transparent material; rather, the artist introduces colour as a new layer upon last year’s non-coloured gestures and to soften their somewhat aggressive quality. The audience is thus lead one step further, towards renewed interpretative connotations or diversions which result from the adding of colour, perceived as a changed sensitivity, or as the alteration of the transparent plexiglas surface into areas less penetrable by one’s gaze. This additional or supplementary action through which the artist retouches and reinvestigates the work, seems to be a kind of explicit and ironic reassertion of the art work’s definitely incomplete quality, constantly doubted by the artist himself. This transformed, enriched construction/installation introduces a new conceptual framework; ultimately, a renewed promise for the understanding and awareness of human activity. It seems as though this is a long ago scheduled meeting, which however bears the freshness and dynamic qualities of a random re-discovery that brings new qualities and new life.

National Bank of Greece Cultural Foundation (MIET)
Solo Show
31 May-13 July 2013
Deligiannidis's works, in colour or black & white, often remind us of graffiti images that we usually come across in public spaces. Regardless of this aesthetic relation, Deligiannidis's goal is not to intervene in his environment in order to alter it, but -via an unconscious, automatic process- to translate on paper his spontaneous reactions to everything around him, the first instants of his interaction with the world.
As the artist himself comments: "Movement in space can be harmonious or not. It can be straight, diagonal or circular; it can create geometrical shapes, words, doodles, fractal, even landscapes. A movement can be destructive, healing or enchanting. This is a series of works that document the simple spontaneous movements that represent my feelings when I'm starting a conversation, when I'm flirting, when I'm asking or giving or playing. All in all, these are the movements that come between the beats of my heart and their utterances. It is the representation of my mobilisation."

This is a diary of drawings not one of words. I have been keeping this diary since Dec'13 and it is an unmatched experience to go through it, "read" the pages, relive the moments! Almost every day I draw on A4's or A3's. Here, I am sharing some of the "pages" with you.

XV Biennial of Young Artists from Europe & the Mediterranean
The Biennial of Young Artists from Europe & the Mediterranean was founded in 1984, when its first edition was held in Barcelona, featuring artists from 6 different countries (Italy, France, Spain, Portugal, Greece, and Yugoslavia), alongside special guests from Arab and Balkan countries. Throughout its history, the biennial has been considered as the main platform for the creation and presentation of artists between 18 to 30 years old, working in a wide range of disciplines (from contemporary art and design, to music, film, fashion and gastronomy). In 2011, the biennial was held in Thessaloniki, presenting the work of more than 300 artists from 30 countries in venues and public spaces around the city. #aristotelis_visualartist, #artbox, #xvbiennialthessaloniki

A WALL TO LET

Visual Communication for a Music Record

Pressed on 160-gram vinyl with a custom front cover artwork on canvas by Aristotelis Deligiannidis. Small pressing of 20 numbered copies! Includes unlimited streaming of budajazz [lp] via the free Bandcamp app, plus high-quality download in MP3, FLAC and more.?

LAYERS II
Aristotelis Deligiannidis’s painting gestures seem to abut on the tradition of Abstract Expressionism, even from afar. However, his painterly expression, using strong gestures, also refers to figuration libre, as well as graffiti. On transparent or non-transparent under layer, with feverish laborious gestures, the artist repeats a process of imprinting his mark, similar to a game of free drawing patterns or to a mechanism using energy towards the conquest and organization of space. Using sharp or curved graphics, narrative and abstract at the same time, he focuses the look (his, ours) to rhythms. This is an artistic practice that feverishly admits the ongoing need for expanding the creative process, at the same time enouncing –through infinite repetition– an ironic challenge against the never definitely complete or final character of the work of art. The result appears shapeless, non-figurative, a mapping of landscapes of the mind, that develops a labyrinth-like script which “represents” the non-visible.

A painting of action.
A painting action.
A swiftly executed activity.
A bodily achievement.

But also, a dispersion, a continuous zigzag of maneuvers and reciprocations that bring forward an ethic and aesthetic attitude towards the permanent and the ephemeral, remembrance and oblivion, affirmation to life and the compelling need to find an instructions manual to go with it.

OPEN - International Exhibition of Sculptures and Installations takes form as a dynamic system of interactivity and relation among different cultural paths by presenting a series of sculptures outdoors in the Venice Lido during the Film Festival, so as to materialise the encounter between two worlds of immediate and "public" communication: contemporary visual art and cinema. The structure of the event has immediately been conceived in an international and emblematic way: one artist, one country. The name aims at highlighting the need for a kind of expression opened not only to the artistic environments of those countries, like Europe and the United States, that traditionally operate in the international art system. Such a need also wants to give space to other nations and contexts that are presently struggling to have a more relevant role in the artistic panorama and to give proof of their creativity. This is the reason for many critics from different countries to be there supporting their artists, whose works will be exposed throughout the Lido of Venice alleys and inside the most representative Hotels, such as Hungaria Palace, Des Bains and The Westin Excelsior. Nowadays the importance of the language of sculptures is experiencing constant growth, as well as new expressive vitality thanks to the power of new operative dimension because the space and time expanse allow its language to become even more expressive.
OPEN is held in collaboration with the Cultural Councillor's Office of the Venice Municipality and is patronised by the Ministry of Foreign Affairs and Cultural Affairs, in agreement with the support of Ministries and Embassies of the Foreign Countries, the Regione Veneto, the Provincia di Venezia and the Venice Municipality. Since 2007, OPEN has also been awarded the Silver Plate of the President of the Republic.
OPEN has in past years included majors works of prestigious artists, such as Marisa Merz, Niki de Saint?Phalle, Bernar Venet, Mimmo Rotella, Yoko Ono, Ju Ming, Magdalena Abakanowicz, Cesar, Arman, Beverly Pepper, Erik Dietman, Emilio Vedova, Jean?Pierre Raynaud, Carl Andre, Keith Haring, Fabrizio Plessi, Julian Schnabel, Dennis Hopper, Feng Mengbo, Chen Zhen, Luigi Ontani, Ben Vautier, Max Neuhaus and Richard Long. In the course of the previous editions, the list of exhibiting artists grew to include participants from Albania, Bolivia, Bulgaria, Canada, Colombia, Indonesia, Israel, Korea, Latvia, Philippines, Romania, South Africa, Tunisia, Turkey, Morocco, Iran and Russia. The event is particularly involved with Asiatic countries, so that participating artists increased year after year. After Taiwan, Japan, Korea, China, Singapore and Hong Kong joined in.? #aristotelis_visualartist, #lidoisland, #OPEN12, #abstractart, #contemporaryart