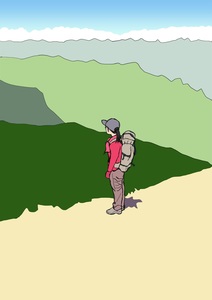 Shigeru K was born in Tokyo in 1959. In childhood, he saw some comics by Osamu Tezuka, and was influenced by him. He was also greatly influenced by his older brother who had an ambition to be an artist and used to draw illustrations and sketches. He was fascinated by the picture of Millet, Andrew Wyeth, Hiroshige Utagawa and Norman Rockwell. But he had no choice of making his living by becoming an artist. After he graduated from university, he got married, had his family and had worked as a teacher for 30 years. As time passed by and his children got independent and started their own lives, Shigeru made up his mind to take an early retirement for being an artist. In his world, the main characters are usually people, daily life, and natural landscapes, all of which are praise for human and nature. Happiness exists in people’s daily life and it is beautiful. People are deeply impressed with the beauty of nature. He wants to express the feeling of happiness and the great impression in his artworks. He illustrates digital pictures with simple colors and a great impact. He believes that, through his artworks, many people can share his happy world with him.
He applied for “The Gift of Chance!” (the supplement to the book “What They Don't Teach You About Becoming an Artist in School” by Arisa Itami) in December 2014. He exhibited in Ouchi Gallery’s 10th 100 artists Exhibition “Tokyo” in June 2015, JCAT SHOWCASE-Group Exhibition- in March 2016, and Solo Exhibition in November 2016 (in Ouchi Gallery).