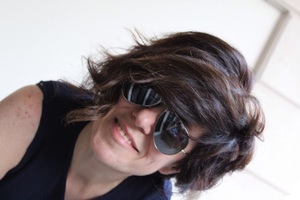 Roberta Bissoli was born in Monza (Italy) on February 26, 1967 and currently she is living and working in Milan metropolitan area. Always passionate about contemporary art, with a particular propensity for material art, she attended artistic circles of Milan, always seeking for exchanging experience with other painters.
Her artworks are very interesting and point out her course of study and her constant research.
The use of different substances in the artworks on canvas, where painting and colors are at material’s disposal; it is the material itself that shapes, colors and gives "thickness" to the piece of art, giving three-dimensionality to the canvas, also involving the senses: sight, touch, olfaction but most of all giving "thrills” to the observer.
From her artworks, you can experience her constant efforts of creating matches, donating material to an abstract and intangible world: the world of the soul, dream, of sound and memory.
Roberta feels that the purpose of her art is to represent the intangible, add something you would not normally see, but that exists, embody the real. The magic of such of art lies therein.
Thanks to immediate appreciations received, Roberta Bissoli begins to realize that her art needs to be made public and shared; arrives as a first major personal exhibition in Milan in 2014 entitled "Black & White – L’emozione dell’Arte" where she exhibited several artworks of material-art, among them EMPTY WORDS, a polymateric artwork on canvas 60x60cm (2013), among the most popular artist and published in the permanent catalog www.artingout.com.
On March 2014 she participated in the exhibition "Donne Insieme 2014" at "Spazio Libero 8 Gallery" in Milan.
In the same year the cultural group "Pittori di Via Bagutta" in Milan chose Roberta for the exhibition "Arte a cielo aperto” (April and October 2014).
She participated in the event organized by ART-UNLIMITED Joyaa, that gave visibility to many young artists through the exhibition of selected artworks by a specialized committee at the Hotel Schneeberg in Vipiteno-Bolzano from June 14 to September 2014.
In November she exhibited in Parma at the LAB Gallery, in collaboration with ART GALLERIES & CO event "Parole ad Arte".
In the month of December 2014 she was named "Artist of the Month" for most views and positive reviews by the organization JOYAA, specific site for emerging artists: "www.joyaa.net".
2015 will be a year full of always more exciting challenges, the artist gets involved in some events organized by "La Via degli Artisti" in Madonna di Campiglio and Milan.
In the month of May 2015 she took part in RomArt 2015 International Biennial of Art and Culture.
In the month of June 2015 in the "Painting Clariata Calciati Competition" and she won the first award with the artwork “HANAMI - fragility and renaissance”!
But the biggest award recognition she ever received – till now- happened at the event organized by ART INTERNATIONAL with the contemporary art curator Mr. Giorgio Grasso at the EXPO 2015 in Milan where she sees her artwork "MONEY MONEY .." polymateric 80x80 painting on canvas with application US dollars banknotes, become part of the private collection of Mediolanum Bank exposed in the Palace-Gallery of Padua.
In February 2016, in collaboration with the Association "Il Sorriso" and the special guest Mr. Giorgio Grasso esteemed critic of art, Roberta Bissoli organized the event "RED PASSION – L’Emozione dell’Arte" where she was be the undisputed star in a joyful and wonderful personal exhibition!!
In June 2016, the artist crossed the national frontiers to expose at the BERLIN GALLERY & AUCTION Berlin with the artwork "MONEY MONEY .." polymateric 50x50 painting on canvas with application US dollars banknotes (POP ART inspiration).
More recently, September 2016, She participated at PREMIO ARTE ROMA 2016. Roebrta was selected among over 2,200 artworks by more than 500 national and international artists, to exhibit at the Stadium Of Domitian in Rome with the artwork EPHEMERAL WORLD polymateric 150x180 painting on canvas with application US dollars banknotes. The event was attended by Proff. Francesco Gallo Mazzeo and Sergio Lombardo.
on canvas with application US dollars banknotes, is acquired by an important collector. Enthusiastically she participated at ARTE FIRENZE 2016 International Contemporary Art Sandro Botticelli - Premio Fortezza da Basso Florence organized by Artetra Salerno with the special contribution of Proff. Vittorio Sgarbi and Conte Daniele Radini Tedeschi famous and appreciated critics and art historians. The artwork present in the exhibition “MAGIC ILLUSION” polymateric 80x80 painting
Artetra Salerno organized in January, ARTE PARIS 2017 - Salvador Dalí Award at the Espace Christiane Peugeot Gallery in Paris with the extraordinary participation of Josè Dalì (son of Salvador Dalí). Roberta Bissoli participates with GOLDEN AGE polymateric art work on 80x80 canvas painting with US dollar banknotes and she is rewarded with a “Salvador Dali Prize”.
Participation at Affordable Art Fair 2017 in Milan with Princeart Salerno.
In February 2017 she organized a Personal Event Show entitled "EPHEMERAL WORLD". The event will be sponsored by the Municipality of Cinisello Balsamo (MI) and will have as curator Alberto Moioli the publisher of the “Encyclopedia of Italian Art”, will take place inside the fantastic Villa of the 18th century Villa Ghirlanda Silva in Cinisello Balsamo (MI).

From April to May 2017 she attends the International Art Prize by Dr. Giorigo Grasso, curator of the Armenian Biennial Pavilion in Venice, 2017, at the MAG Gallery Galleria Mediolanum Art Gallery in Padua.
On April 29-30, 2017, the "GOLDEN AGE" work was auctioned by Prince Arte Gallery Salon's House of Auctions.
In June 2017 she participated enthusiastically in the second edition of "ARTE SALERNO" International Art Prize at Palazzo Fruscione Salerno organized by Artera in collaboration with Prince Art. Ten Days of Art and Comparison with Artists, Collectors and Critics such as Proff.Vittorio Sgarbi, Conte Daniele Radini Tedeschi and Federico Caloi. The work presented at the exhibition “MONEY PASSION” polymateric 80x80 on canvas painting with US dollar banknotes is purchased by a well-known collector..