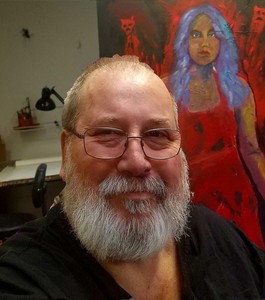 Art Tour International Magazine Artivist of the Year, 2019 -
for my dedication to Human Rights

ATIM Summer 2019, New York City Summer in the Arts, and Best of International Arts presents Ric Conn Artist.
On July 31 I was interviewed on the Art2heart tv show in New York city.

I am an internationally known award winning expressionist artist

I am inspired mostly by Toulouse-Lautrec, Munch, Picasso, Matisse and the Expressionists.

My work is different—it is not conventional, academic, or even the new modernism. I am creating a new avant-garde.

I won the “Face of Queen Anne’s County” medal for one of my oil paintings. My awards also include First, Second, Third and Best in Show awards as well as numerous Honorable mention awards and Award of Merit certificates. I have been featured in articles in several newspapers, and magazines, including “Art in America’s” issue on galleries and artists in America, and interviewed on television, both local and network.

I teach painting and drawing workshops in local schools, arts councils, an environmental center, and private lessons in my studio. I have also given portrait drawing demonstrations.

I have paintings in private collections in several states and Australia.

I deal with relevant social issues, equality, empowerment and psychological conditions. I want the issues to confront the—I want to viewer to feel something (either positive or negative) when viewing my work to increase awareness and understanding.

This painting is about the problem women have to go through everyday with men crowding them and touching them both benignly and malignantly.

“P.C. - political correctness is crushing us”

The doors can represent many things, but no matter what - her life, her choice.

“That's Not My Name”

Wolf whistles, regular whistles, cat calls, sexualized name calling, as well as staring, are insulting things that women have always had to put up with, and unfortunately they still do. This paintings addresses this problem. I got the idea for this composition from a video by the Ting Tings which addresses this same problem.

“The Statue of Liberty in Kevlar”

women are under attack by the sexual predators, their liberty is seriously compromised, our liberty and that of our entire country is under attack by the politicians. This painting shows Lady Liberty in kevlar (which coincidentally was invented by a woman), she stands for us all.

This painting is about taking charge of your life, keeping the past but putting it away and moving forward. The title comes from my father who always said it whenever I wanted to rely on past behavior instead of changing and improving.,