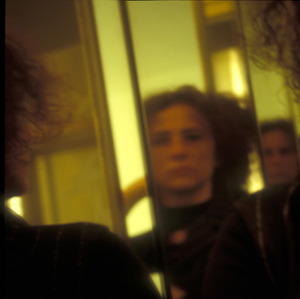 Born in Rome, I live and work between Rome and Buenos Aires. I shoot as an artist and think as a photographer. That is why I call "artistic reportage" my photographic genre. Projects mainly stem from the understanding of what and how I want to narrate through my shots: a search of meanings and emotions of non-straightforward realities. I have been a photographer since 1986, I went to Studio 10b (2008) to have a deeper knowledge of photo retouching; two stages with David Harvey (TPW, 2005-06), of Street Life, which, incidentally, led to my going from analog to digital; the Graffiti Association and Graffiti Press (1998-99), the first time to attend the school of Photo-Journalism and then collaborate with the Agency; Antonio Pluchino's Videoambiente (since 1999 to date) to have a deeper knowledge of cinema and cinematography, Lusher's colour theory, structural analysis of cinematographic and iconographic language; Stefano Carofei's Pentaprisma, (1990) to attend its photograophy course; Roberta Filippi (1990) to attend the water colour course, which led to my passing from b/w to colour; Stefano Gioia's Photomania (1986) for b/w printing; Giancarlo Berluti, for medium-format theory and practice.
In addition to various publications, I have explained, many times, both personal and collective, in Italy in Rome, Venice, Orbetello, Lucca, Genoa, Turin, Modena, Florence, Limestone, Bomarzo, Orte, Capalbio; outside Italy in London, New York, Buenos Aires, Santa Fe 'and Rosario (Argentina), Tehran, Havana, Barcelona with the following projects "Shinbergs'10 Touchable|As|Untouchable", "Lapides", "The other faces of the Skin", "MoonShining", "Living the Apple," "Hot Firebergs'08 |as|ice", "Fireberg the beginning", "Patishere", "Americana Breakfast table set", "Music-sync-moving", "Cuba By Heart", "The 10 Commandments".
In 2011 I received a Nomination at the 5° Photography Master Cup, New York, with "Americana Breakfast table set"; 2 Honorable Mentions at IPA in Los Angeles (Camminaconme and Mirror, you are my secret); the 2 nd prize at the Paris PX3 Shinenbergs'10 Touchable | as | Untouchable, and I came in with the Official Selections “Lapides”, “Moonshining”, “The Other Faces of the Skin”, “Look, talk, walk with me”, “Via Crucis”; I also have received the Award of Critics and the Award high value style, for "Tokyo International Award", with Lapides. In 2010 I won the first prize in the exhibition "Earth, water, fire, air" at the Castle of Capalbio (GR), with photos of Firebergs'08 Hot|as|ice and Shinebergs'10 Touchable|As|Untouchable; I received 2 Honorable Mentions PX3/Le the Prix de la Photographie Paris (Living the Happy birthday Apple and Region) and 6 Honorable Mentions at IPA in Los Angeles (Shinebergs'10 Touchable|As|Untouchable, The Other Face of the skin, Moon Shining, Via Crucis and Living the Apple). In 2009, I was included in the London International Creative Competition shortlist with Firebergs'08 Hot|as|ice; I was conferred 4 Honorable Mentions at New York IPA Competition (Americana Breakfast Table Set, Rome-Teheran Return Ticket, Patishere), the book on "Firebergs'08 Hot|as|ice" and "Fireberg the beginning" was published for PhotoBook HP Indigo Prize; I was awarded the second prize of People's Choice Awards of PX3/ Le Prix de la Photographie Paris, which went along with the publication of the winning photograph (Firebergs'08 Hot|as|ice) on the PX3 Annual Book. In 2008, I was conferred 4 Honorable Mentions at PX3/Le Prix de la Photographie Paris (Patishere, Cuba on the wall, Awaiting, 60 years of Italian Constitution) and 7 more Honorable Mentions in the New York IPA Competition (Firebergs'08 Hot|as|ice, Fireberg the beginning and Patishere). In 2007, I was conferred an Honorable Mention in the New York IPA Competition (Deities tributes).

A contribute to the color classification of states of mind
What color are the tears? What color are the chills? What color is your smile? It 'really fear black and red is just the passion? Is there a way to link the states of mind in a chromatic scale universally shared? In this swamp of no points of reference, if not some cliché, however, I decided to start from ground easy to identify the colors of the places. Easy? In part, yes, there is a common horizon to look at. But the point is: what skyline view in common? On what frame to stop looking? Where you turn on the mood that makes the place "that place" and that color "its color" reference?

Cuba on the Wall

Cuba on the wall
Since 1999 I have collected a great deal of material about posters in the cities and along the roads outside, on murals, from some historic monuments: that's Cuba on the wall
The posters promote the revolution and the politics of this country and serve also as a source of historical documentation, being the only existing form of publicity, the collection of the manifestos which invade Cuba. No longer a novelty for Cubans, it never ceases to amaze visitors arriving from industrialised countries where advertisments are only used for luxury goods.
In a few years, for better or for worse, probably we will not see less, if any, of this and I would to leave a historical trace, particular, social, with which a population has lived and is living for almost fifty years, but also give a fascinated mood.

Mirror, you are my secret

"Mirror, you are my secret," is a project on relationships.
From those families, other relationships may change, or have been changed a part of us. In this project I want to highlight the relationship between me and the people who are around me, which I chose to be part of my life, distinguishing the report more or less deep through the three-dimensional language of photography.
In fact I would like to make a book of portraits of people with whom I relate, in which the photos are both two-dimensional, and anaglyphs, both three-dimensional, thus giving strength and different meaning.
The title means that people are my mirror, because they have a hand that belongs to me, that could be positive or negative, known or unknown. If a person is part of my life it'is because I am also a part of that person. I see the mirror image of myself and reveals, through the book, parts of me, about my character and my way of being. I find myself through others, and relationships with others, family of origin included.
The performance in which all the people I met took place September 17, 2011. Some of them have left their thoughts. These thoughts belong to me.
For three-dimensional pictures taken with Loreo lens, and for those of Fuji Real 3D anaglyphs need special glasses that I planned to put in the book.