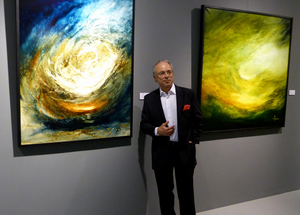 Francois WEBER was born in french region of Perigord, land of the 40000 year old Lascaux painted cave and country of the "one thousend castles".
He was soon interested in drawing and was fascinated by the watercolorists he met in his native region: thus began an enduring passion.
In the 1980's, WEBER paints his first watercolors and perfects the so called 'wet technique", allowing him to express his favorite atmospheres: morning mists, reflections on water, wave foam, city lights, anonymous silhouettes: a world where softness mixes with loneliness, strangeness, sometimes even with the unquiet.
After staying away from painting for a few years, he tries oil painting, but has to start all over again to rediscover the hazy atmospheres of watercolors.
His work gains in richness and strenght without disowning its past.
Between representational and abstract arts the limit is tenuous.
After PARIS and several French cities, WEBER's oil paintings crossed borders to ROME, MILAN, NANTONG, BEIJING, SHANGHAI, and soon NEW YORK.