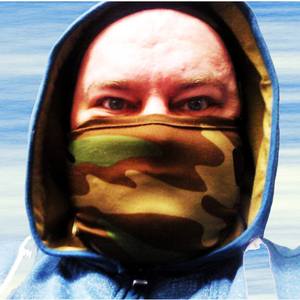 Highly gifted, highly sensitive person - this defines me. And the creativity! The otherness, not to be able to communicate with humans, only to be able to create.

Outside, even of the 'outsiders', I create, I transform. I use everything - from my own works, to photographs, to works of 'art' of the masters. There is no art, there is no copy-right. There is no creativity. These are all just words. And words are rules, that keep us locked up.

There is an occult cosmos out there. In a second a million stars die and a million are born - and we quibble about a still picture. We put on make-up, tie our ties and we be human. In the cosmos, that is less than nothing.

Gloom and doom - that describes me best, or not at all. Depends on who you ask.

Influences: mostly dada, futurists, surrealists, science fiction/fantasy/horror, because they were 'other' as well.

Art is Absurd (as is art)

A definition of art would be useful. I don't have one. My 'definition' at the moment is simply: "Art is absurd (so is art)".

This of course is meant to question the validity, the meaning, the various definitions of art. I abhor that part of the art world which makes millions, by producing absolutely nothing (I see a Rothko as nothing more than a painted wall. I fail to see the art). I wish art could be simpler. I think that is the sentiment of many people. But art isn't simple anymore. It is both that ridiculous, multi-million world of art dealers and buyers, in which status is more important than skills, and it is a world of artists that mean well and try to say something with their art. Then there is the art without skills. It is also art (sadly). Skills are also missing in academia. What are we to do? Bring the skills back? Rant that everything is political and form a socialist-like protest, and go in fact nowhere. Or can we, must we, invent a new form for art?

I'm still working on these questions. My sentiments lie with just painting, making art, writing, composing and have a good time amongst friends. Time will decide. And I will not be around when my paintings make millions, so why should I care? :-)

“All art is a fiction (real, neither unreal)”

Real, neither unreal, are subjective. Nothing is really real, until our mind tells us to accept it (through our senses). One can see the workings of the mind, or ideas, as fictions. Art is an outpouring of the mind, thus a fiction.

“An art-liking (is not art, just looks like it)”

Not everything you can see is art. And art is not just visual. The easiest way of producing art is to take a picture and proclaim it to be art. This is what is called 'modern art', and it has been done for about one and a half century now.

Absurdism is a fiction ruled by an incomprehensible system. All art is a fiction (neither real, or unreal), so all art is probably absurd.
This system that is incomprehensible is either a metaphor for the human inner mind or a representation of an arbitrary external world. We expect the inner and external world to be rational and coherent. If this is not the case, we question our mind, we get frustrated. Absurdism does this. It makes the mind go frustrated.

But I am very poorly today

But I am very poorly today & very stupid & hate everybody & everything.
Charles Darwin.

-No title –
Words like these, full of emotion, humanize the famous. People like Darwin, or Marx, or … have become larger than life. I call them persona. They are modeled after legendary and fantastic characters like Jesus, Moses, Mohammed, Alexander the Great.
Even though greatness is measured by importunateness & impressiveness & hype, in art greatness comes from the title. There are only three themes in art for the last 500 years, each with its own title:

Landscape with the Fall of Icarus

All these pictures are great. I, RobotKlaw have incorporated them in my works. They look great! I made them with my 'good recording apparatus'
For only 2500 $ these great pictures can be yours. Payable with paypal to: robotklauw@gmail.com

“Landscape with the fall of Icarus”

The object as absence

These are mainly empty pictures, with a small object in them. The absence is not so much the object as it is the whiteness.

“The object as absence I”

“The object as absence II”

“The object as absence IV”

“The object as absence III”

“The object as absence V”

Robot search content V.1.4<666>XViFD.QVD.112. The New Jerusalem is a series of three times six Works of Art, depicting the Darkness before the coming of the next Jerusalem. Heavily influenced by Blake’s Jerusalem, some Prodigy and an early work by myself, depicting black mountains on a black planet, subtly lit by a gibbous moon.

A small selection of works from this era

What can you do with torsos? Missing arms and legs, hands and feet, the torso has almost no expression. Still, they are easily recognizable. It is hard to work with torsos, but here are some nice works.

A few images from this - almost forgotten - portfolio.

Lurid (a bit), semi-shocking, but most of all an homage to pulp fiction

“On Venus we discovered, quite by accident, that these creatures are susceptible to electric shock”

“coming down the hill”

“in the grassy plain”

Some of my experimental portraits - to see where the boundery of the portrait lies.

“portrait of girl with butterfly”

“There is a red ship - there is a white ship”

This is about all I have left from my early years. Everything from the 1980's-1995 was destroyed. From 1996-1999 I have about three drawings, some photographs and some sketches.

I'm compiling a small book with aphorisms. Each is accompanied by an illustration, or is the illustration. I play with the text and the image. The titles are the pages from the book.

A few pictures of my son, who is the sun in my life

“Take me to the bridge”

“Talk to the hand”

These are fun. I've got a lot of them and will post more in the future

Some artworks that resemble pen and ink drawings.

“Portrait of Ingres, which is perhaps a portrait of Robotklaw”

Sometimes I get in a sort of 'magazine' mood, and all my pictures come out looking like glossies or celeb-photos. It's probable that this is due to some form of brain damage:-) Whatever the case, here are some of them and a lot of other stuff.

'Untitled' is the actual title.

“The guards of light”

“Forget Renoir - Cut Up Technique No 14, the copy paste a renoir”

“Last of the Nudes”

A version I'm not so happy about

As with my portraits, I try to see where the boundaries of the landscape are. Furthermore, I want to make beautiful pictures.

“Landscape - draw me up into your sky”

A number of abstract artworks. I want to do as much art as i can, so i create about 0-5-10 pieces a day. I can always do 0 pieces! My aim is for about 3 works a day. Be it in paint, pencils, photos, digital. Because i'm a composer as well, my music also counts.

“bizarre, if not mystical”

For Sam Kiyoumarsi, love you bro <3

“I will allow it”

“Puts baby in a corner”

“She carries her lipstick in her bra”

“The Big Surf of Kahuna”

“The tree of life”

“You don't remember me”

Photo-Graphs are my studio photos, which are worked with graphic software.
Objects were: slate from Sauerland (Germany) and the French Alpes, a pinecone, a prism

The 5 senses - as they touch

“The sense of Flying - Floatsam”

“The sense of Touch -sensual”

A Photo-Graph series. The objects were: shark-teeth, seashells, a piece of asbestos.

CloseD is about textures

Plastic, the fur of a cat, metal, skin. Deconstructed - as usual with my art - the art gets new meaning with the Karisma pencils, perhaps the best pencils in the world.

I did some portraits of myself. They say a lot about me, but it is 'hidden', almost occult information you have to look for. I'm also a bit gloom here I think. I.e., I'm in a depression.

This belongs to the Photo-Graph series.

Skeletons and such shit

Don't dream it's over