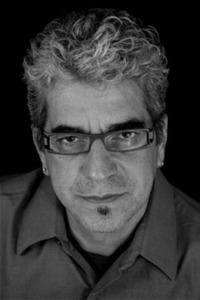 Pios Rodaman was born “Pio-Carlos Carrijo Roda” in Niteroi, Rio de Janeiro (Brazil) on January 12th, 1953. Rodaman began to study art while he was in elementary school. In those early years, he
took drawing lessons at the Instituto Abel in Niteroi, followed by the study of artistic drawing with Ana Canella and contemporary painting and art history at the Universidade Santa Ursula. A great
deal of his training comes from his studies with Antonio Machado, with whom he learned color theory, the importance of lines, and “free painting.” It is no surprise that with this extensive formal
training and his own natural artistic talent Rodaman has become an internationally admired artist.
While Rodaman has been exhibiting his art since 1990, it was when he moved to Miami, Florida, in 1999, that he began to earn renown as an artist. As a mark of this change in his life and his work,
he began signing his work as “Pius Rodamano” (before 1999, his paintings were signed “Pio Roda”) and he began utilizing the Encaustic technique. These creations were made of used motor oil,
pigment, and wax, displaying the visceral passion Rodaman has for art. His work was soon being used almost exclusively by an influential interior designer, Bill Chadwick, further inspiring the painter
to create unique, expressive pieces. When Chadwick passed away at the end of 2003, Rodaman was devastated. As a result, he did not paint for all of 2004.
In 2005 Rodaman picked up the paintbrush again, now signing his paintings “Pios Rodaman” (the suffix of this surname is in homage to his American mother, Ruth Erman). His latest work showcases
his talents using acrylic paints, and the paintings are still as lively and expressive as anything he has done before. During this period, Rodaman was selected as a Signature Member of the Boca
Raton Museum of Art - The Artists'Guild (Boca Raton, Florida) . He is also represented in New York City by Agora Gallery. Since 1990, Rodaman has had numerous exhibitions in Rio de Janeiro,
Sao Paulo, Miami, Boca Raton, New York, and elsewhere and his work continues to mesmerize and impress art enthusiasts and collectors.
To view Rodaman's latest works of Digital Art, navigate in his website (Portfolio I till ...).You can also visit the page retrospective to view a synopsis of his career. Be prepared to be excited,
impressed and amazed, at his artistic creativity and ingenuity, as his work has evolved into contemporary themes and expression.
Exhibitions:
Individual: 1990 - Espaço Cultural Banco do Brazil - Rio de Janeiro; 1991 - Espaço de Arte Trianon - São Paulo; 1993 - Pio Roda and Benigno - Galeria Belas Artes - Rio de Janeiro; Pio Roda and
Márcia Mansur - Soho Art Gallery - Niterói; 2000 - Suzana Faccini Gallery - Miami.