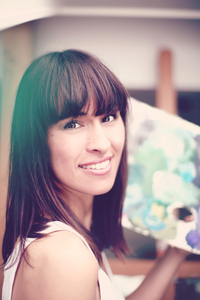 Paper, brushes and Co. are on her side since she can remember.

Until her 34 birthday she have practiced painting as a self-taught and always work with academically trained artists.

Within the age of 34 years she decided to include painting now fully into her life and getting out of the recent and long-term career field.

She took the opportunity and began to attend a study-path of painting at the german Academy of Fine Arts "an der Alten Spinnerei in Kolbermoor" with Professor Markus Lüpertz.

Her works range from illustrative painting to abstracting.

Nominated for the KITZ ART Award 2015