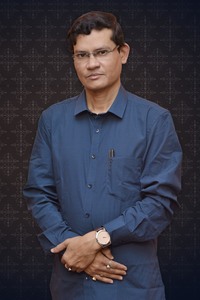 The Language of Art is Global. From, whichever part of the world it may originate; it has a universal appeal. However, that universality grows from the local or traditional root. Our journey in promoting Indian Contemporary and Modern Art began in 2008 when we started our Online Gallery under the brand name of Art Auction India based in Kolkata, India. We promote distinguished Indian Artists who dedicate their lives in Indian Contemporary and Modern art...

Probal Banerjee is born on 24th April, 1970 in Calcutta, West Bengal, India. He is an inborn artist. Before doing his professional course on Art and Painting from Govt. College of Art & Craft, Calcutta, he has been showcasing his Art and Paintings in different Art Galleries in Kolkata. Such an Artist did his Professional Course on Art in 1993. His family heritage plays an important role in devising the eclectic trend that Probal Banerjee displays his paintings. He has a spiritual bent of mind. He inherited these qualities but transformed them to suit his personality. There is no apparent religiosity or spirituality in his choice of subject, but his forms, which are derived from Eastern Impressionism or Post-Impressionism and infuse some of folk elements, reveal some sort of spiritual sobriety and concentration in delineation of lyrical beauty. Mythical world has been a source of subject in his paintings and he has delineated it from the standpoint of Indian Perspective of Art and Painting. Through linearity he creates visual pleasure that unveils the hidden treasures of beauty in life.

At one point of time, he was influenced by the Western Modernistic idioms which is more richer, but to grasp it properly, he gradually came to the contention that to create proper identity of expression some kind of rootedness to tradition is essential. His search for the root started since then. He delved deeper into the mystical thoughts of Indian Philosophy and religious traditions. He also explored the rich heritage of folk-lore and myth submerged in our historic and pre-historic past. He got a spiritual bent of mind. His travels to different places might have induced him towards search for a mystic truth. His chromatic exposures and formation of textures are very rich and has opened a new direction in our Modernistic Identity. His paintings create a continuum, bypassing the risk of self-duplication. Each time a new face of the same theme is presented, thus affording a fresh perspective into his repertoire. Yet his artwork is significant for creating a space for itself, and an aesthetic heaven for its viewers. Painting is his passion to express his thoughts and feelings.

Beautifully painted in mixed media on Ivory paper. With wonderful texture based on the figure.
9X7 Inch on Ivory Paper
Year of Creation 2010
Style : Figurative

Beautiful Texture based painting on Ivory Paper Board with Mixed Media