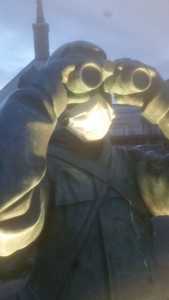 Since studying at Chelsea S.O.A over twenty years ago my work focuses on the Nautical man-made monsters of the sea. My training in welded metal sculpture gives me an understanding of the engineering purely for the function of these beasts, which is what fascinates me the most. I'm also intrigued by the menacing, dark and sometimes threatening structures that lurk in the deep sea. I specialise in large drawings and Mono-Prints, with a particular passion for Submarines.

I'm a visual Artist and Sculptor trapped at home with my two boys and finding a way to relate my personal feelings towards the Covid-19 pandemic.
My work usually focuses on nautical man-made monsters of the sea and that’s where my head usually is. Normally thinking in three dimensions, in solid
engineered structures. These subjects are designed purely for their function, this is what intrigues me most. I felt compelled to produce some large scale
drawings depicting how I and maybe others feel in this unpredictable and threatening situation. To me its like an invisible minefield, that moments chance of breathing in contaminated matter or touching a virus carrying person, all our usual instincts to touch, nurture, feel, comfort are restricted. So I introduced sea mines to give my work a nautical
theme. I was instantly surprised between the similarity in shape of the mines and the virus molecules. Ordering some large paper I cleared the dining room wall
and went for it. Maybe it’s the contact of charcoal, hands on paper, the process being tactile and moulded by my hands, the hands that cannot touch anything
outside of my home. I have portrayed them suspended in a motionless space, waiting to be triggered by contact, menacing and deadly. I hope my work
will create a consciousness of this delicate position and how human touch has become a precarious thing. My drawings are two metres across to enforce the social distancing enforced on our lives.

I have completed two large charcoal and pastel drawings ‘Minefield 1’ and ‘Minefield 2’. I also produced a time-lapse video of the work in progress. You can find this film on my Facebook page https://www.facebook.com/GeorginaBownArtist/
www.georgina-artist.co.uk

This is the second large charcoal drawing completed since the beginning of Lockdown. Fitting these huge delicate artworks in my home has been a challenge while I can't get to my studio. These works (series of three) that I have been compelled to produce will be a testament to this time and a constant reminder that we really don't know what is out there, and what damage we as humans may have done to this planet.

The majority of my work has concentrated on Mono-Prints. I have developed this drawing style technique. My passion for Submarines has kept me entertained and intrigued as an Artist. These works have been shown at the Royal Scottish Academy, Royal society of British artists, Royal Glasgow Institute and The Masters of Mono-Printing at the Bankside Gallery.

This Mono-Print which was selected for 'The Masters of Mono-Printing' at Bankside Gallery hopefully expresses the vast scale of these marine beasts.
The Sub is commanding the space that it is displayed. I usually draw the Submarines out of water, naked and vulnerable, all the dark threat taken away, disarmed.

Alongside my drawings and print I fabricate sculptures as a three dimensional response the the two dimensional artwork. 'Morph' has evolved from my experiments of morning together the forms of deep sea creatures and Submarines. I am totally fascinated by the form of nautical things that have evolved through time man-made and organic. This idea of form follows function inspires my work. 'Morph' crosses over the iconic symbol of a whale tail with structural elements of the engineered Submarines. The sculpture is suspended by it's tail, lifeless and vulnerable, also a reminder of how Whales are captured and gutted. This artwork is not to shock, it actually has a inoffensive feel as it gently sways like a pendulum on it's stand.

This is the first in a series of sculptures exploring the concept of morphing together the two elements of deep sea creatures and Submarines. They both have a similar function in the water and their structure is dictated by this. The artwork is suspended in a waterless tank in a harness similar to ones used when rescueing whales etc. I have kept the scale so there is a connection to the human form too.