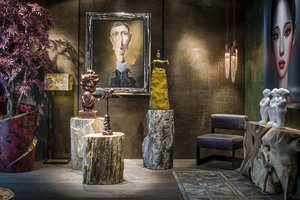 Galerie Kunstbroeders is a gallery specialising in contemporary Chinese artists.

Thanks to our own explorations of China and the friendly relationships that we have established with the Chinese art world as a result, our gallery has built up an impressive art portfolio over the past years. We have thereby been able to help establish a number of young Chinese artists and bring them to wider attention.

Throughout the year we exhibit remarkable work by promising Chinese sculptors such as Gong Dong, Xie Aige, Wu Jia Hui, Zhang Yong and painters such as Zhang Xiang Ming, Sheng Shaopeng, Wei Ping and Lin Jin Chun. In the mean time the art portfolio has been growing with established names such as Zhong Biao; Zhenning Li; Fy Yu; Ren Rong and many others.
Galerie Kunstbroeders is established by Rijk Schipper, who after living in China for 6 years started his Gallery in 2010.

An Kun and his Pretty Bourgeois Friends and More Series

The Chinese artist AN KUN (born 1968) can be described as the artist with the velvet brushstrokes. But in the case of AN KUN they are brushstrokes with which he shares his opinions on society with the viewer in a charming and refined way. With compassion and respect for his subjects (how could it be otherwise: AN KUN paints only his inner circle of friends), he strips every subject of his or her Chinese characteristics and identity. And that is how AN KUN tells his own story.

Socially successful Chinese are keen to be painted by the master. And that’s quite strange. Because every subject who appears before An Kun’s easel is subtly relieved of his or her Chinese appearance. You would therefore think that his subjects would feel short-changed. But nothing is further from the truth. It is a great honour to appear in a painting by AN KUN.

In his series of paintings PRETTY, BOURGEOIS FRIENDS (2010-2014) AN KUN depicts the ambitious, wealthy Chinese in a European style. The series consists partly of portraits, and partly of full-length paintings, supplemented with complete scenes featuring multiple subjects in one work.

With his subtle visual language the artist feeds the discussion about the increasing westernisation of Chinese society. In fact AN KUN paints his Chinese bourgeois friends in disguise. He does this magnificently and with unanimous approbation from art connoisseurs around the world. That is AN KUN’s strength: quality and spirituality.

“My Pretty Bourgeois Friend from Xinjiang”

“My Pretty Bourgeois Friend 'The Self Inspector'”

Chen Jianfeng born in 1970 in Suchuan Jianyang; got his art degree at the Sichuan Neijing’Teachers college. He obtained his first prize award while studying with the art work ‘Busy Man’. Chen has since the year had numerous group and solo expositions in China. As well a few in Europe. Galerie Kunstbroeders has introduced Chen in Europe and showed him for the first time at Naarden The Art Fair and Art Karlsruhe in 2020 for the first time. Chen’s style is characterised with big strokes uniform colours in which he models like a sculpture beautiful dreamy creatures.

The Series: Body temperature of soul

This type of work is based on the present, and it uses crystalline visual language and surreal representation to complete the creation. The work analyzes how people live in contemporary society. Everyone lives in a state of behavior that superficially shapes them, in a world that restricts freedom and creates a sense of alienation. The barriers of trust between each other continue to increase. At this time, deep communication and dialogue are needed. In addition, each individual is gradually alienating in this current environment, and each of us needs to repair and improve itself, so that the body and the soul can coordinate and talk. Thus breaking the limits and finding new ways of life, bringing new possibilities, developing new physical, mental and mental structures.

“Dialogue of the Soul”