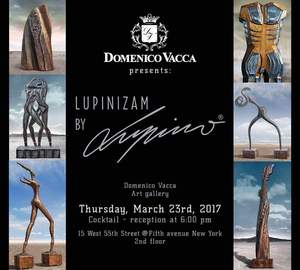 Stephan Lupino, or Lupino as he is known to his legions of admirers, is recognized as a global phenomenon in the world of modern art through his prodigious collections of photography, paintings and sculpture which interweave complex and recurring themes of sensual desire, vulnerability, lost innocence, abandonment and the quest for redemption. These themes are articulated through often subversive references to popular culture, organized religion, lost innocence and tribal rituals. Lupino’s style is clearly visible in the visceral and highly physical executions which give a power, beauty and dynamism to his art, coined by the artist as Lupinizam.

In the 1980s, when New Yorkers were attracted to art, Lupino represented the art of the time. Mingling with celebrities and media power brokers Lupino was in the very centre of the vortex that was the New York club scene and was celebrated in magazines throughout the world including Vogue, L’Espresso and Playboy. Even then, in the early stages of his career, he had begun to assimilate the magical characteristics of signs, shapes and colors and the impressions of New York curators and artists. He immersed himself in this environment, the nexus of the New York art world and it became a part of him. Photography what his medium of expression.

For a long time, he was satisfied with his work as a photographer, using mechanical and technological tools to capture the essence of living images. Over time, however, he developed a need for something more, for a different form of expression that was truly his own and unique to his own experiences.
Making sketches on scraps of paper, his Ideas began to emerge. Hundreds of sketches, each displaying some aspect of his vision of life through his part, have led him to where he is today.

The world in 2016 is not the same as it was the 1980s, and neither is Lupino. His contemporary voice manifests his creativity through his paintings, reliefs and sculptural pieces. He imposes no artificial limits on his designs. Each design brings its own form of expression, And that may be executed in one, two or even all three of the media he works in. His variations of a design idea flow with the dictates of the materials.

His vision captures the essence of life – eroticism – as its basis. Eroticism is the thematic core of all of Lupino’s work. Everything develops from it: Every ugliness and beauty; every cryptic attraction and paradox spread from this core. His work celebrates the broadest spectrum of life and love, from the goddess Aphrodite to modern Eve-like temptresses, hermaphrodites, predators, bisexuals, voodoo dancers, models, lesbians, great lovers like Caesar and Cleopatra, icons of the 20th century such as Marilyn Monroe and many more.

“Another World - Waistline with Nails - front”

From Another World Series by Stephan Lupino. 2017 study with nails

“Another World - Waistline with Nails - rear”

From Another World Series by Stephan Lupino. 2017 study with nails - rear

Go to www.stephanlupino.com for more information on the artist and his collection and latest exhibitions