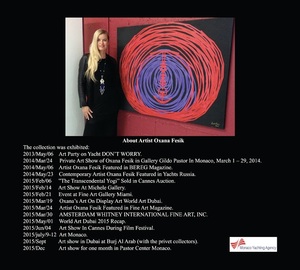 Oxana Fesik – who paints by the name Oxafe – was born in Siberia and graduated from the classical art school Surikov. From an early age she loved to observe nature and spoke to her as a close friend, tuning into some “higher power,” the presence of which she clearly felt in her whole being. “I love Monet and Cezanne,” she told me in a recent interview from Miami where she was exhibiting during Art Basel week, “but I know I will never be like them.” Her intent, she says, is to deliver a message that there exists a higher energy, a higher Divine being, a higher self. “Everybody calls it something different, but to me it is simply the Divine.” The result is a tangible evidence of something special with an open forum for viewers to decide for themselves. “When I ask people to tell me what they see, often I haven’t even thought about what they are telling me.” Her work is created, at times, with her eyes closed so that the subconscious realm readily manifests. Coming from a tough Siberian climate and oppressive Soviet reality, Oxana found joy and strength in this deeply personal communication. Her quest took her to India, to the Oneness University where, after a month with the Guru, the Avatar, she understood that she had two choices: “Either I have to be awakened or I have to die. In my life, I experienced so much suffering that I wanted to run away but I found there is no exit. After the Oneness experience, I feel like I am a different human being with no limitations, truly experiencing unconditional love. I saw many forms of Divine energy, which in essence is formless. I have no works to express it, but am able to touch it in my paintings. I found a Higher state of consciousness in India that may pave the way to changes on the planet, and changes in the consciousness of human beings. I understood that paintings and music can be vehicles for such growth.”

Continues the artist, who is on her way to exhibit in Dubai and Monaco, “I spent my childhood with the feeling that I was born at the wrong time and in the wrong place… and like any child, I sought to share the joy of seeing the world. In search of the means of expression, I instinctively turned to painting and this process overtook me completely. Painting has become my salvation. As an adult I began a deliberate internal search which helped me realize my spiritual need. Going through the various processes there, I had the unique experience of higher states of consciousness that I have tried to show in my milieu.” - VICTOR FORBES