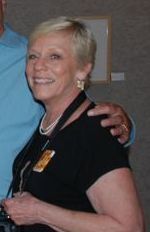 Judi Geer Kellas, an artist living and working in Lawrence, Kansas has been a professional artist for more than forty years. She began a series of art works in 1996 that has continued to the current day: women in aviation. She became interested in the topic a few months prior to the first Amelia Earhart Festival in Atchison, Kansas when she was asked to exhibit her work, jury a women’s art exhibit and generally participate in that exciting festival celebrating Amelia’s Centennial.
Geer Kellas’ work uses Kansas and women's history to further appreciation, respect and recognition of the magnificent women in aviation, from Raymonde de Laroche in 1910 to contemporary women like Patty Wagstaff.
Inspired by the birthplace of Amelia Earhart in Atchison and the historical birthplace of modern aviation in Wichita, Geer Kellas began to create her series, Celebration of Flight: Women in Aviation. More than 80 paintings, drawings and prints now honor forty women. The series embodies the artist's missions to preserve the birth and living heritage of women in aviation and to inspire today's visual art audience by commemorating the extraordinary feats of the early pioneers and the contemporary women who acknowledge AE’s inspiration, the sisters of Amelia.
Geer Kellas works in mixed-media paintings, silver point drawings and original prints (serigraphs, lithographs, relief prints). She has shown her works in 50 solo shows and 95 group exhibits in art galleries and museums regionally, nationally and internationally.
”My art work never was plein aire painting; early on I used photography as a sketching tool, solving Cezanne's problem of making the world sit as still as an apple. Photography became an integral part of my work, not only using photos as sketches, but also giving the art work content and spirit. I often use manipulated digital images collaged or affixed directly to the canvas or paper combined with painting, drawing and metal leafing,” explained Geer Kellas.
Both her parents were amateur artists, and at age eight she painted her first oil painting. She studied art and music then went on earn a Bachelor of Arts in Fine Art and a Master of Arts in Painting.
When she married George Kellas and they moved to the Midwest, Geer Kellas taught art at Park College, Johnson County Community College and Kansas University in the 1970s. She owned and operated 7E7 Gallery (later Kellas Gallery) in Lawrence, Kansas for 11 years. In 1983 she decided to sell the art gallery in order to return to her studio full time.

Celebration of Flight: Women in Aviation