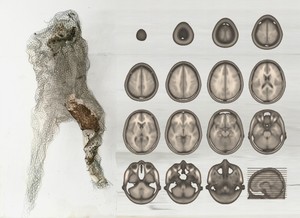 Participant in the annual Aperti art event in Switzerland since 2010

Acquisitions
In various private collectors in Switzerland, Europe and the USA and in the permanent collection of the EPFL, the Gallery Roch and Gallery Arcane

Member of the Swiss artist association, Visarte, and committee member of APERTI

“We fill pre-existing forms and when we fill them we change them and are changed." Borges and I, Frank Bidart

Middelmann turned to the visual arts to explore means of expression beyond language. She refuses to restrict herself to a single technique or material. She works with bitumen, ash, oil paint, acrylic, charcoal, collage, sand, coffee, dirt, paper, canvas, wire, recycled materials, etc. Her artwork is raw and necessarily expressive. She enjoys the direct physical contact with the material. Her process is one of building up and tearing away, seeking most importantly an authentic expression of an experience that exists beyond words.

Her current work is called "reclaim", meaning to restore to a previous natural state, to rescue or salvage, or to take back or to repossess. She is exploring sculpture using her school textbooks and notebooks, old canvases, and other salvaged materials.

With her interest in perception and its ambiguity, she is actively collaborating and designing research projects with various leading neuroscientists at leading universities in the USA, Germany and Switzerland.

In 5 years, her work has been shown in over 30 exhibits and art fairs in Switzerland, Germany, Finland and Greece. She is a member of the Swiss Artist Association, VISARTE.

Born in Switzerland, Middelmann moved to New York in 1989. After earning a degree in Creative writing and International Relations from the Johns Hopkins University, she worked in publishing in New York. In 2002, she moved back to Switzerland and studied first stained glass at the Ecole Supérieure de Création et de Vitrail in Monthey and then earned a visual art degree from the Visual Art School in Basel in 2009.

She currently lives and works in Lausanne, Switzerland.