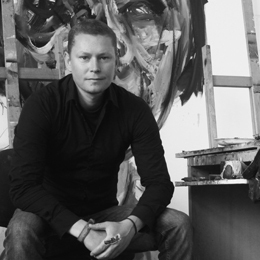 Daniel was born in 1982. He lives and works in Leiden, the Netherlands. After having left the computer graphics industry in 2013 Daniel fully committed himself to his art. He attended several art fairs with great success. Being spotted by media his work was shown and talked about on television, radio, various publications and was elected artist of the month in which he was preceded by prominent dutch artists. Daniel is now preparing for his first big solo show in December. Daniel Martin's most recent work comprises explicit portraits of defiled faces, and the images have an unsettling expression. It feels like the portraits were deliberately damaged after the painting was completed. This consciously cultivated spontaneity in painting is intrinsic to Martin's work. A misshapen tree, that imperfection of beauty, is a source of inspiration to Daniel Martin. A ratio affected by chaos. That violation of appearance is anonymous and sidelines the individual's identity and character, and it makes the faces dissolve or return in nature's chaos.