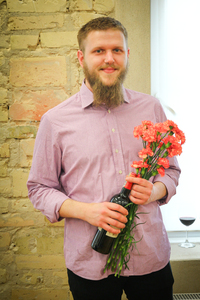 Andrius Makarevicius has been exploring creative dimensions since he was a child. Every event, new relationships or objects were as if a starting point. The artist studied fine arts at school and acquired the core creative techniques and already then had his idols. Similarly to all the artists-to-be, Andrius was trying to outgrow the artists whom he was admiring. This development process is very important to an artist, as he is continuously looking back at his idols during the process of creation, develops new ones and this helps him to find new points of view, new theories and pseudo theories, which enables him to experiment and introduce new symbols and new realities.
First creations (those within the period of 2008-2010) tended to portrait a woman's body, which was flexible to the artist's interpretations and in this way body became a topic that analyzed the surroundings, situation quality and their formulation. First paintings show woman's body with a dash of naivety and open symbols which are based on direct nature allusions. During this period the artist was under the influence of surrealism, interpretations of which he applied in his art. Objects in the works of art are easily recognizable. The artist's growth had a huge impact on the further artistic development, as well as continuation of the main topic. Approximately since 2011 till 2012 women became more and more common in his creations, and the motif of a woman became dominant. Naturally, a play with surrealism disappeared, and the coloring and strokes started to change. Daring and intense coloring was replaced by brighter and lighter strokes that do not mark the boundaries. Previous period was not completely forgotten. From time to time old coloring elements would emerge. The motif of a woman became dominant, but from a physical perspective she started to fade away. She lost her concreteness, strict and easily recognizable shape. Period, that could be called "Passion. Silent", A. Makarevi?ius has also created some works that are dominated by a man figure. The interpretation of one body was supplemented with philosophical considerations by another one, all through the conscious analysis of relationships. The creation "Immaculate Conception" was a starting point in the qualitative relationship analysis. This painting conveys the idea of the formation of the first couple. The character in the painting as if catches the last moments till the radical change - the appearance of a woman. The inclusion of two persons in the formation of the relationship enabled to maneuver between double emotional layers and dogmas.
The last, or the current stage is very sharp and brave. The artist is coming back to the initial coloring and making his creations more vibrant. Colors are screaming and conveying some strong emotional messages. Similarly as in the initial period, the artist is analyzing relationships, but this time they are not infused with secrets that are imposed by the society. Open and straightforward, as if he is creating allusions for illusions. Drama as well as passion is not missing during this period. Red haired women, safety and a combination of two worlds become the trademark of the artist's works.
Andrius Makarevicius art is a social fantasizing. It is between the real and the hidden, which is even more real. Between the erotic and the innocent. Between the truth of day and night. Between the natural and artificial. Every piece of art analyzes social questions, the importance of the symbol of a woman and enables the interpretation without stereotypes.