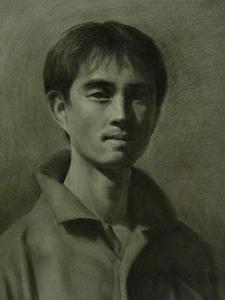 Hyeonggon Kim was born in Kangwondo, South Korea in 1970 and grew up in Seoul City. He began studying art in high school. During this time, he studied charcoal pencil drawing with a focus on basic form, and traditional Korean painting at an art institute. After that, he entered In-cheon University, where he studied more specifically traditional Korean painting. Later, he entered the graduate program, where he was a student as well as a teaching assistant for three years in the fine art department. He received a BFA in 1997 and an MFA of Fine Art painting from In-cheon University. After receiving his MFA in 2002, he decided to continue his studies in the United States because he wanted to focus more on western traditional oil painting. So that’s why he received MFA in 2007 of Fine Art Painting from Academy of Art University in San Francisco.

All of his artwork is done with oil paints on canvas. The paintings now, he is drawing is modified and recreated from the Western / European classic style of painting. The materials that he used for his paintings are mainly oil-based paint on canvas. Depends on the propensity, He sometimes use different materials. The themes and of his recent paintings are not the traditional Korean-contemporary style. He has been drawing for a long time. Studying fine arts in the States, he has opened eyes in drawing for Figure in landscape, Portraits, and Cityscape. From the foundation of classicism subject and theme, his drawings are descriptive and realistic with the contrast of transparency and chroma.

“Afternoon in the forest III”

“Afternoon in the forest I”

“Sunset in the field”

“Sunset of Red houses on the hill”

Sunset of Golden Gate bridge in San Francisco_8x22_Oil on Linen_2009

“Sunset of Red houses on the hill”