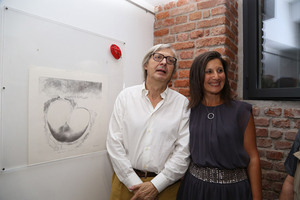 The Food becomes concept and metaphor. The half apple symbolizes the separation of man from Eden, "the third heaven", taking up the idea behind the installation of Michelangelo Pistoletto, “Mela Reintegrata”, exposed in May 2015, at Piazza Duomo in Milan. An Adam apple, sunk into the ground of south earth of the world. The lithographs in paper, handmade through granite zinc plates, are contaminated with conceptual foods, salt from Sicily or Himalaya, coffee from plantations of Central America or Africa, red wine, teas and liqueurs. Foods are full of earth that generated them and have within themselves the immanence of all generations in transit, identities in search of spirituality or social gathering. Half apple means contemporary human sense of missing, due to homeland itinerant, chasing jobs that constantly change. Feeling half means having an identity struggling with stereotypes, with the temporary nature, with the repetition ... Having the perception of finite time and willing to fill it, engulfing and chasing emotions or forging bonds that pervade, able to warm, to reshape fragility.

Technique used for the realization of the lithographies

The drawings and paintings were made by hand molds in zinc plate granite.
The lithographs from 1/99 to 99/99 come from a process that starts from monochrome up to the next step of 6 plates, with subsequent color.
Some tests then were made separately with different sequences, such as those using the magenta and yellow.

The first lithography of the series has a frame in Plexiglas 80cmx80cm, with on the top an orange rope, shaping an eight, twisted to a bollard of a sailboat. Meaning of the frame is the human journey toward infinity. This work has been exhibited at the Biennale of contemporary art in Milan, in Tadini palace, from September 5th to October 1st, 2015.