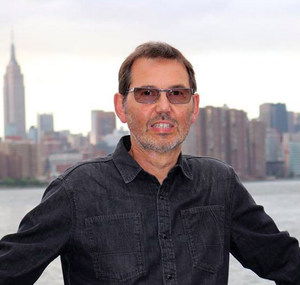 Luc Standaert started his career as a painter at the age of 40, although as a student he had a classical artistic education at the Ghent (Belgium) Saint-Luke-institute, where he specialised in scenography. His teachers were a.o. Erik Boone, Jean-Pierre Maes and Andreï Ivaneanu (Rumania).
Later on his professional path went from being active in theatres to organizing major show events to becoming a music publisher. Luc is currently still active as a music publisher, an activity that brought him both local and international successes.

But once an artist always an artist seems to be true for him as later on he was driven back to drawing, painting, occasionally even etching.
He uses different techniques such as acrylic, oil, pastel, water colour and the plain pencil.
Characteristic for Luc’s work is a very personal, warm and colorful palette that without any doubt has been inspired by the exotic regions he frequented, especially the Caribbean islands.
He tries to express in his work the communion between man and landscape, the environment in which he exists and that often determines him as a human being. For this purpose Luc uses on the spot made sketches, his own photographic archives and other visual material at hand.

In his more recent works Luc’s social engagement sometimes becomes very clear. Some of his recent works show a very critical approach towards society and the world we currently live in. Guantanamo prisoners, Mexican immigrants illegally crossing the U.S. border, people deprived of their personal freedom, … are all themes we find in his paintings and installations. Sublimations of these themes are the next logical step in Luc’s evolution and this path grants him access to many international exhibitions.
New York art critic John Austin writes: “Luc Standaert’s paintings come out at you, frenzied. They pummel you, cajole you, and over time something haunting, even unsettling permeates the work. This is the result of the artist’s highly sophisticated pictorial intelligence, which recognizes the value of indicating spatio-temporal involution.”

“They Came In Peace”

Acrylic on canvas. Sold in new York (2018) to Wilkins Art Associates for their client Bank of America.