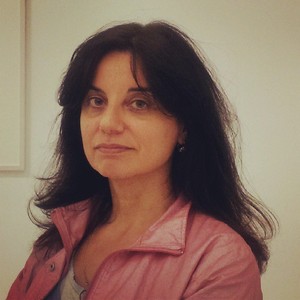 Since 1988 Letizia Cortini exhibits in group and solo exhibitions in Italy and abroad. From 1987 to 1997 she attended drawing and Art History stage organized by Milena Cubra.kovic, Simona Wel1er, Giovanni. Battista Salerno, GianPistone.

During the Academic year 1996/97 she attended a painting class in the Art school of Rome “Nicola Zabaglia” to develop his knowledge of “pittura dal vero” and perspective. At the end of the course she was awarded for the best work produced during the year.

Interested in different expressive languages, from painting to photography, from poetry to Clildren Literature, in 1997 she attended a class of creative writing established from Roberto Cotroneo, writer and literary critic. The class was organized within the cultural association “L'Oleandro”.

Since 1997 she is one of the members of DUNA ( Women and artists national association), affiliate to IAWA (International Association Women Artists) participating in various National and international projects organized from the associations such as: “Resembling grains of sand” (Calcata, 1998); Duna perspectives (Calcata, .1999); two editions of Documenta Donna (Palazzo Patrizi,:Siena, 2000 and Galleria La Borgognona; Roma, 2001); I° Mondial Forum of Mediterranean creative women (Rodi, Grecia, 2001)

In 2002 she was the recipient of The Pollock Krasner Foundation grant of New York as a support to her artistic activity.

In 2002 Letizia Cortini published a catalog with the critical contribution of Sveva Mandolesi ( Contemporary Art critic) Pirangelo Schiera ( Historian, previously director of the Cultural Institute in Berlin) Mi1ena Cubrakovic (artist). In June 2002 she was invited from the “Assessorato alle politiche culturali, nunicipality of Rome” to the Art exhibition organized in Testaccio within the area of the ex-slaughter house of Rome.

In 2003 she received from the President of the Italian Republic the medal of honor for her painting “the red boat” within the 49 edition of the National Contest "Premio Città di Pizzo”.

In 2004, the “Pari Opportunità board”of the National Research Counsel (CNR) and of National Institut Nuclear Phisic (INFN) selected one of her work to be published on the main cover of the official Acts of the conference “ Pari Opportunità in Research Institutions”.

In 2004 was organized an anthological exhibition with the patronage of the Mayor of Castiglione d' Orcia (SI) of the Val d'Orcia Parco and the Community of Senese, Mount Amiata in Rocca Tentennano.

In the same year she was invited from the municipality of Capalbio (GR) to exhibit as a solo artist in the Collacchioni Castle.
Since then she has continued to paint exhibiting in Italy and abroad. She has opened an art gallery for two years in Rome (2009-2010) and she held several workshops for children and adults.

What is particularly evident in these works is the strong experimental vein which combines the traditional pictorial means with techniques and materials coming from beyond the pictorial: a fresh, joyful cretive imagination, together an eagerness "to do", to look for and continuously discover new possibilities of expression, new means with which communicate at their best one's mood and one's inner world. The well-loved watercolours always present in abstract forms with sinuous boundaries give way to artisan handcraft, modelling wires of copper and lead into metallic arabesques, that sticks, glues and combines objects and images that recur constantly and are displayed in such a masterly way as to form an apparently casual multiformed and multicoloured tapestry.

I had the oportunity to appreciate the work of Letizia Cortini when she visited Berlin once, some years ago. During this visit we exchanged a few very interesting views on her way of working.
What struck me immediately was the freshness What struck me immediately was the freshness with which this painter discovered and transmitted her ideas and sensations. Since then I am still impressed by the simplicity and, simultaneously, the extremely good taste she has in cultivating her "traces of memory".
[...] The level of sublimation that Letizia manages to give to the reality of life, with her threads, her windows, her colours, is truly most beautiful and, as it seems to me, of high artistic value.