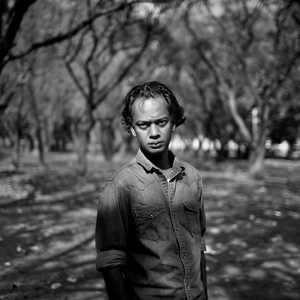 Mohammad Rakibul Hasan is a documentary photographer and conceptual artist based in Dhaka, Bangladesh represented by Redux Pictures, USA. Hasan holds a Post Graduate Diploma in Photojournalism from Ateneo de Manila University and also graduated in Film & Video Production from UBS Film School at the University of Sydney. He was nominated for the Joop Swart Masterclass, UNICEF Photo of the Year, short listed in the Ian Parry scholarship, Sony World Photography Awards in professional category, finalist in Contemporary Talents Competition organized by Foundation Francois Schneider as well as achieved several accolades in the field of photography worldwide. His work has been published in numerous international magazines and exhibited in several countries. He was commissioned for many international organizations and worked in overseas. He is currently studying Certificate in Art History, a hybrid online on-campus program at the University of Oxford.

The original photograph was taken from public domain and copyright free. There was no identification of the photographer who took the picture. Mona Lisa (c. 1503 - 06) by Leonardo da Vinci is a creation during renaissance period when study of human anatomy was highly prioritized. Dissection of Mona Lisa (c. 2015) is a ready-made conceptualization to perceive again the well known best portrait of the world. In our preconception mind the image of Mona Lisa is already been set up harmonically from its original orientation. Deformation of rearrangement, psychologically can distract our vision and mind but nothing can change the real representation of Mona Lisa. The original version is a classical combination of a number of golden ratio and other coalition of compositional-aesthetical pragmatic view. Dissection here plays a role of how we perceive our common view from a window differently and how we know what we used to know from our very common consciousness.

Earthrise is a photograph taken by astronaut William Anders in 1968 during Apollo 8 Mission to the Moon. The photograph is recreated from the source photos of Blue Marble and the surface of Earthrise from NASA which are in public domain and copyright free. Public Domain Remix is legally allowed to recreate and reform new creative ideas. I have replicated the original idea of the Earthrise to re-experience our existence in this vast and dynamic universe. From the moon we look like a lonely planet where water and life are existed and our heroic events and evolution of species all are happened in this planet Earth. The picture offers to think further about every human as an individual unit has capacity to understand the universe as Stephen Hawking said

"We are just an advanced breed of monkeys on a minor planet of a very average star. But we can understand the Universe. That makes us something very special"

Julian Paul Assange is a hacktivist and Co-founder of WikiLeaks who believes right to information. Through his website, he has published numerous secret documents of US government and other countries. He has been accused to sexual offence in Sweden. He is now under the protection of political asylum in Embassy of Ecuador in London. The photograph is created from over thirty found photos from internet which are digitally altered. It is a close portrait. Pixelization toward grid of huge number color variations and layers after layers have made a depth of appearance of a person who is controversial in the world. Every little square of color unit has a common solidarity with other units remind us technique of pointillism in a digital era.

It is a ready-made creation of a found object collected from public domain which is copyright free and there is no trace for the photographer who originally had taken this picture. It is assumed that the picture was taken during 1920 when Adolf Hitler was young. The idea of this art piece has come from conceptual art of Marcel Duchamp specially his ready-made L.H.O.O.Q. (c. 1919) as well as Twenty-five colored Marilyns (c. 1962) by Andy Warhol. Adolf Hitler was an Austrian born German politician and the central character of World War II and holocaust. His appearance in a sequence and gradual translucence offer to reexamine who the real person is. It invites more about his fearless personality and to justify his characteristics and vision toward humanity. Multiplicity with tonal transparency confuses spectator about the virtue of likeness and creates illusionistic dilemma recognizing the real one.