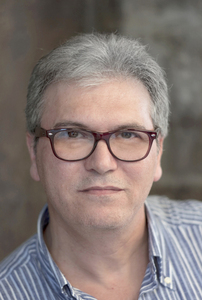 He is meticulous in his creations of the support for his philosophical-aesthetic ideas derived from the 1974s and start of the 20TH century, and for spatial planes and painted figures which be adapts and harmonizes together. In this way he establishes a marvellous balance between geometric forms in relief and female anthropomorphic figures.

his interest is focused on Greek mythology, which had reverberation with the island of Lipari in Sicily where he was born, in order to exalt the spirituality of classical art in a new contemporary way, so arriving at a total synthesis of art from that of ancient times to today which allows him to fully express his own pictorial dimension.

In 2012 he founded the Nautismo movement which narrates ancient stories and journeys and illustrates them through a modern language: the Nauti are nothing other than compositional elements (symbols of the rational particles of human thought) which are composed together to create forms evoking horsemen, boats, and even spaceships, all freely suspended between the land, sea, and sky. Everything is laid out following a neo-plastic and geometric rigor.

Highly appreciated by critics and art galleries, he has exhibited in public and private venues in Italy and abroad with great public success. Shows of his work have recently toured to various museums.

The artist Aldo Claudio Medorini has attended in EXPO IN THE CITY, in EXPO 2015, cultural platform that the City and the Chamber of Commerce of Milan have chosen to associate to the Italian Pavilion for Feed and recently also in EXPO 2015 in the cocoa and chocolate (food of the Gods) pavillon. Among the many bibliographical references to him, mention should be made of the Catalogo dell’Arte Moderna published by Giorgio Mondadori. http://www.wardnasse.com/aldo-claudio-medorini.html

Naturismo tells of stories and travel ancient and illustrates them with a linguaggioe symbolism modern, through Nauti which are placed on the canvas looking for a sense, representing particles of rational human thought, which give rise to associated Metaforme which knights, ships and spaceships that travel or sail in emotionality of lands, seas, skies astral ... of metaphysical spaces, reviving the aesthetic condition of the trip, which takes on the symbolic value of themselves of psychic mechanisms, memories, emotions and of human motivation.
The Nautismo then crosses and combines two worlds; both have a classical conception of poetic language-formal-painting. They are worlds that run parallel, drawn from history (from the greek-Latin civilization and the art movements of the last century). On the one hand the formal classicism of the "nice" platonic also aimed at preserving the "good" (in its multiple meanings), and sometimes with strong advanced hyperrealism; the other, the "neo-plasticity" mondriano geometric punctuated by "arithmetic" trend in which lurks the reality of the enigmatic code Medorini.
The Nutismo for what looks like a "Bi-Classicimo", a personal language that "realism" and "Abstraction" run on the same track spiritual in our globalized world.
www.nautismo.it

This artist has the advantage of telling ancient tales with modern textures. Its geometric shapes that protrude from heaven diaphanous and nuanced to sunrises and sunsets, are evidence of a meditation on the postulates of Johann Carl Friedrich Gauss in which the German mathematician and philosopher, says that the need of the physical geometry can not be It is proven by human reason or for human reasons. Maybe in another life, he continues Gauss penetrate the nature of space, which is now unattainable.
Space for Aldo Claudio Medorini is perceived as an area where the female becomes gap and response between the man who lives in the immanent and transcendent in its projection.

Everything starts from here, from Elena and an apple