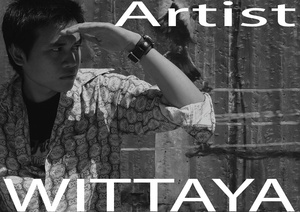 About the Artist Artworks

Wittaya Pised was born 1981 in Nong Kleua, Thailand.
Looking back, Wittaya Pised or "Taem" as he is fondly called, was born to humble farming parents from the village of Nong Kleua in Thailand’s north eastern province of Buriram. Taem, tending the family’s water buffalo or working the parched dry soil of Issan, through his eyes, almost without conscience thought, he bagan translating the beauty he saw all around him into pictures as early as he can remember.
Though self-taught and never having had a lesson in art until at the age of 12, his teacher Khun Sujin, while at Khean Dong Pittaya Kom school in Buriram, saw a real inner talent and continued to foster Taem’s art development. Taem joined local competitions and eventually was presented the highest award in his province for watercolour art works whilst still in high school.

With an ambition to become a police officer, Taem, at the age of 20, moved from country to Bangkok to study political science at Ramkamhaeng University. He continued to paint tin private whenever he had a moment to spare in school and supporting himself waiting on tables until 2am every night in Bangkok. Soon, word got out among his friends and within Bangkok&ä#146;s art circles that this charming and talented was a true and natural artist. Hearing this, some of Thailand’ most established artists began to support him and help him take his art from the City of Angels to San Francisco, Amsterdam, London, Zurich and New York.

Taem’s work comes straight from his heart. His colours - oils on corrugated iran - reflect the many and subtle images of his native country, mirroring the simplicity of his people, and the authenticity of his commitment to Lord Buddha. His boyhood and life as the son of a farmer, working student, and developing artist inspires him to use simple everyday materials that others count as useless and is one of his most outstanding original contributions to Thai art. Lotus flowers as well as birds inspire this self taught artist and continue to shape and define the character of his work and marks it most definitely as a "Wittaya Pised" art piece.

Just i feel it like this fishes and people r same free and lot of happiness.when u glow up.some pressure in our so city will force them to be in forms

Lotus standing up. their beauty is symbolic to our mind