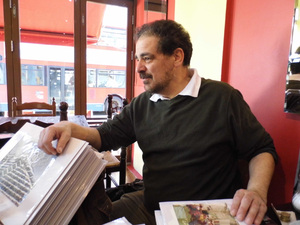 Born in Northampton (UK) Michael spent fifteen years living in Israel. He has been taking photographs since he got his first camera – a Kodak Brownie 127 Box – for his 9th birthday, acting as the family photographic diarist. A number of his images were popular (and several definitely NOT popular) !

Although his photography took a fair bit of his leisure time, it was only in 2000 when he joined the Tel Aviv Camera Club that Michael took the photographic world a lot more seriously. The TACC Chairman – Moshe Taub – helped Michael get his first exhibition at the Mercaz Bikurei Ha Itim in 2001 and again a year later in the same place. At the same time, Michael had images accepted in the TACC group exhibitions. It was during this time that Michael joined the International Freelance Photographers Organization based in the USA – a membership that has been very useful considering the security situation in Israel and then later in London.

Taking what he had learned from Moshe Taub, Michael then got two further solo exhibitions – one in the Holon Municipality in December 2003 and Beit Tammi in Tel Aviv in October 2004 while also continuing to exhibit with the TACC.

During 2003 to 2004, Michael helped Moshe Taub & Rommi Goldhammer with the setting up of the Ventures Group of Song-writers, Poets, Artists and Photographers which was a group that mixed the various artistic outputs for cards, CD's, calendars and other products. Michael became the group Publicity Secretary, maintaining good contact with the Jerusalem Post.

In January 2005, Michael returned to London and instantly joined up with the Isle of Wight Photographic Society and then the Hampstead Photographic Society. These are two very different clubs with two very different attitudes. Michael went on to serve the HPS for three years as Programme and Publicity Secretary from 2005 to 2008. During this time, he initiated the HPS Newsletter (2006) which he continues to edit. It almost died in it's infancy when the club set up the website, but there was a mini-rebellion and is now counted as needed archive material as well as a source of information.

Since returning to London, Michael has had numerous exhibitions in North and North West London and also at Warwick University. He has appeared in group exhibitions for both the Hampstead and the Isle of Wight Photographic Societies as well as having a number of images in Ventnor in the Isle of Wight celebrating the Ventnor Library 70th Anniversary. He has also given numerous talks in London and Warwick as well as entering numerous competitions and getting acceptances into various international Salons.

Since 2013, Michael has entered international salons and has a number accepted, including Sydney Harbour, Wrekin, Port Talbot and Midlands as well as in on-line galleries such as Light, Space and Time and the Lublin PS (Poland). In 2016, Michael had a photographic image accepted into the Royal Academy Summer Exhibition (UK) and in 2017 had an acceptance into a group exhibition at the Ben Uri Museum and gallery in London NW8. Hi next two solo exhibition were at the Phoenix Cinema in East FInchley in September 2017 and 2018. He achieved two photographic distinctions - QPSA in 2018 and AFIAP in 2019 before exhibiting at the XII Florence Biennial of Contemporary Art in Italy during October 2019 and with the Hampstead Arts Council ins Central Dt Giles in London's West End in February 2020 just before coronavirus caused total lock-down.

This was taken as part of a publicity stunt by the daughter of an Indian Restaurant owner. The owner had refurbished and re-opened, but not a lot was happening until the daughter took her cd player outside and started dancing on the sidewalk. I then gave it an artistic treatment

This was part of a photographic job I did for one of the teachers and I decided to give this particular image an abstract feel.

This came about after going through my travel images and I realized that a theme was happening. Cafes and restaurants are more than just a watering hole to me. I plan my next move and write up my notes, That way I don't waste my time when on the road and I know what I am doing other than enjoying a decent coffee and a bite to eat. The results are in an exhibition running throughout September in North London. There are plenty more in the collection - those shown here are just a selection

Here I was meeting with friends on the way to the airport. The best doughnuts ever

This was my 7:30 in the morning coffee place before catching the train to Portsmouth Harbour - until it closed down to be replaced by a Starbucks. The coffee was not so great,but was a meet up for couples to meet up before work who were married - to other people! I guess it only closed after certain spouses found out!

This is near the Albertina and does the best coffee in Austria. My favorite in Vienna is called a Brauner. I was meeting up with a dance teacher with whom I was on my way to Obervaart for a dance festival. Unfortunately I did put my foot in it with a pompous waiter in a fancy restaurant round the corner. My friend speaks fluent German (thinking that I don't - as did the waiter) and made the order. Cocking his patronising head in my direction, he asked my friend what I wanted to drink and I just growled 'Kleiner Brauner' - his face said that he wasn't sure if I was asking for a coffee or calling him a little s***

Not a job this time - visiting relatives. They are just as much coffee fanatics as I am

This was part of a project with which I was involved back in 2011. I got in with two other photographers for an exhibition in the 7 Dials Club in Covent Garden in London and this was one of the accepted images

This is in Newport in the Isle of Wight. I stop here to do my write-ups and plans each time I am in the island. The tea is great, the coffee good...........and the decoration reminds me of my late maternal grandparents house!

When I went to Rome for the first time, a journalist friend told me to avoid restaurants. The portions are mean, aimed at tourists and charge like a lawyer. Instead I was told to find a tobacconist, newsagent, sweet shop, grocery and post office all in one place and of they have tables and chairs outside, that is the place to eat. Wow - the owner's mother made the food. Even a simple tuna sandwich was amazing

Here I was meeting up with someone I hadn't seen for years. That was not the reason for being in Boston - that was photography, but conveniently this ex of mine was not living to far away.

“Restaurant in the Marina Piccola,Cagliari, Sardigna”

Here I was on a photo-challenge with a local photographer that I have known for years. I found out he is as much as a coffee and foodie as I am