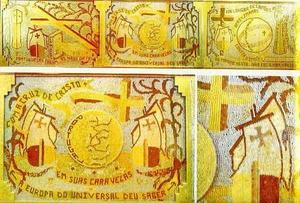 COINS IN ART
BELIEVE IT OR NOT
The largest collection in the world Coins in Art
Amazing, Bizarre, Unbelievable
UNIQUE IN ALL WORLD 3 GUINNESS RECORDS
The new way of creating art
One of the world’s finest collections. Containing thousands of coins.
This magnificent coin collection covers the history of the most countries in this planet.
The handicraft consist in murals with a background oil painting and concluded in the shapes wished by the author with the gluing of thousands of coins from almost the entire world, values, colours and metals.
A true treasure. The history of the world in money (coins.)
The main theme is the sea, the Caravels, the discoveries and the fragment of the history from this planet.
Botanical garden Made with coins from around the world Applied to oil painting by collage system
These works represent part of the richness the navigation of Portugal to the all world gave to world. Because of the Portuguese navigation the world began to have more knowledge of medicinal plants and exotic
The world, people, culture the value of each country. Recorded in coins.
The inimitable images are showed in the brilliant multi-coloured combination never before imagined.
Splendour and beauty.
Three of these murals have been previously honoured with the accredited
Guinness Book of Records.

Built in the threefold system, this mural is united in its whole ( 1.83 X 8.40 ) by two columns shaped in pine timber, posterior painted with oil paint and finished with the gluing of European coins with different metals and values. Forming into relief some points of this mural. A unique masterpiece in the world. An extraordinary piece eith a magnificence beauty.
In the construction of this mural were necessary, and used with the gluing system, 67.567 coins. Money from several countries in Europa.
It´s an alliance of different metals. It´s money! Are coins with different coinage! Coins which in this mural show and brighten splendidly the history of their countries. This mural is on Guinness Book of Records
To create the background, to encircle and not only, all the shapes created by the author was used the Spanish peseta. It was the chosen coin. Stamped in aluminium, with the facial value of a peseta, shows the effigy of his Majesty the King D. Juan Carlos of Spain.
The construction of this mural has the purpose of pointing out and remind how few people, with determination and courage, can do in the construction and union of a better world for all. The choice of using coins to build this mural has the purpose of manifesting the fortune that followed the request of this few… To the rest of the world.
In the middle of the mural, as salient from the relief of the golden sun, it is the relief of Portugal. Steady… Salient in the west coast of Europe, constructive horizon to the world. At east and west of this golden circle, the light to the planet, two caravels sail with the light… Towards the rest of the world.
Blessing to this sail. In the right superior part between the small circles of silver coins an aureal Cross with curvilinear shapes. “ The human race limps in its obscurant space” The skay, in its whole, continues illuminating us in its shapes. It´s a wanting to indicate the spherical shape of the planet.
Because of all this centre of the mural, the author shows clearly the truth: “ Com a Cruz de Cristo Portugal em suas caravelas à Europa do universal deu saber “ ( with Christ Cross Portugal in its caravels to the Europe the universal gave knowledge)
Aport of one the caravels as well as astaboard of another, two trunks with several branching that link, above the columns of the mural, at east and west, in a hug of union and construction. Unfortunately in materials and sordid divergences. In the inflexible insensibility of some world administrations, that in the approximation and construction of humanity of dygone days ignored by nowadays leaders.
In the left side of the mural one can see a goldem column built with coins from different countries in Europe. In its right side, made with copper coins, a trunk eith many branching. Routes opened to the world. Continuing to the right, wrapped up by a crucifix, built with English and French coins, which end in a Latin Cross made with portuguese coins, the Portuguese Ston Monument. Following with our eyes to the right, as blessed, treated with kindness and protected by the large arms of the Cross, floats a caravel. Appears the Camões´s Lusiadas and the Holy Bible. The Cross is supportsd by these instruments of education and prayer. By a branching of sixteen arms, jutting out from the centre of the universe, it´s the sixteen magnetic points! It´s the mariner´s compass card! It´s the way to the world!
In the foreground of the mural, as everything that it´s big, a simple phrse: “ PORTUGUESAS FORAM… AS NAUS DA FÉ, which means PORTUGUESAS WERE… THE VESSELS OF FAITH”
In the right side of the mural, next to the column, a caravel with Christ Cross inits sails. Sailing from Europe to the unknown world, Asterm, as if it was being taken in tow a latin cross… Faith in God. The prayer of Portugal to the world.
Above and undermeath the cross, two arms with the following words “ APROXIMAMOS- CONSTRUIMOS ( which means we approached, we built” These arms seem to be holding the Earth in the universe. Engraved in the planet the words PORTUGAL – SPAIN – TORDESILHAS. Agreement to the rest of the world, between these two great Nations in the European continent.
The Latin Cross, symbol of the Holy Church. Continuing to the rigth above a book, with the word DESCOBRIMENTOS engraved in it, it is the Portuguese Stone monument with the words “ PAZ-LEI-A PORTUGAL A SUA GLóRIA” “ Peace- law- to Portugal its glory”.
In the top of the mural, one can read NA LÍNGUA DE CAMÕES REZA A DEUS NOVO MUNDO “ In the Camões language pray to God a new world”
In the foregrond: AO MUNDO RESTO… NÃO FOI O MAR VASTO “ To the ret of the world… It wasn´t wide the sea”.
Measures: 1.83 X 8.40 metros Used to built 67.567 coins
This mural was recognizede with a record in the Guinness Book of records, as being the world´s biggest mural

With a background oil paiting over MDF, this mural measures 1.83 X 5.00 metres. In the structure of this mural were used 37.121 coins with different values, colours and metals. Coins from Portugal.
In this mural it is possible to view the portuguese map, as wel as the Portuguese stone monument, symbol and distinctive mark of Portugal. In the bottom, at all extension of the mural, the words: from the knowledge to the meeting…in the gathering of cultures… it was the wind in the shinning sales of the portuguese Caravels.
This mural was recognizede with a record in the Guinness Book of records, as being the world´s biggest mural, in 2000.
Medidas do Painel / Measures: 1.83 X 5.00 Metros

This mural measures 1.88 height and 1.12 metras length and it was with 2.860 coins with different values and metals. In this masterpiece it is viewable a sword and a castle, cradle of this motherland.
Medidas do painel / measures: 1.88 X 1.12 Metros

This mural was built with several coins from different values and metals that were glued over a background oil paiting. The artist also included a poem from his own authorship.
Medidas do painel / Measures: 0.90 X 1.50 Metros

Several coins with different values and metals were used to build this mural. The coins were glued over a background oil paiting.
Medidas do painel / measures: 1.12 X 1.62 Metros

In the structure of this mural, over a background oil painting in platex, were used several coins from different countris, values,sizes, colours and metals.
Medidas do painel / Mesasures: 1.23 X 1.71 Metros