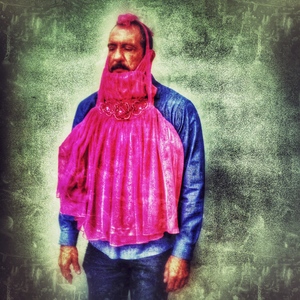 Alex Heria is an artist using photography as his medium of choice. Exploring the world of the average and quotidian as explosive surreal and highly embellished compositions with various photomechanical tools, the works is arranged in a variety of series.
As a whole, the work explores notions of fantasy media superimposed on our common surroundings making them larger then life and heightening their sense of specialness. A strong Latin influence and upbringing in the always colorful and eccentric streets of miami have worked to develop this aesthetic, as well as fantasy tv shows from the 60s such as Bewitched, I Dream of Jeannie and Space:1999. Strong ties to surrealists of the 1930-40s and Social Documentary photographers Arbus, Friedlander, Winogrand and Eggleston are present in the images.
The current body of work brings in much of the "new processes" of today's image making. Called REÁL MIAMI, the series is completely shot on iPhone, mostly in drive-bys in car, keyed up in Google Snapseed then uploaded directly to Instagram. The images explore the boring and bizarre of the streets and lifestyle of Greater Miami. There is a sense of being the explorer who charts the unknown in the very well known, in making images at home of surroundings so familiar one often goes blind to their inherent specialness.
Previous photographic explorations are all able to be viewed at www.ultralex.com