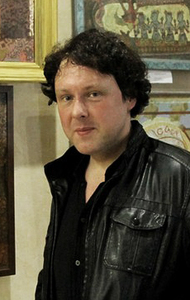 1989 - launched the exhibition activities at the regional exhibition "I paint the world", "Exhibition Hall of Artists Union", Ryazan. He was awarded a diploma "For the best work on display."

Painting in the style ornamentalism

This album contains my painting style ornamentalism for twenty years - since 1996 year.
Our world is run through electromagnetic waves. Wave is a pattern. The whole world consists of these ornaments. I bear them on canvas using brushes and paints.

“Intercession of the Theotokos”

“Evening - of the diptych "Four days"”

“Dream of the boy about the yards”

“A still life with a vase”

“A still life with a mask and a cup”

“To Chaine of the Ryazan Kremlin”

“The bridge through river Oka with a kind to the Ryazan Kremlin.”

“The sky over Manhattan.”

“The Juno and perhaps.”

“The daughter of morning light. Portrait of Anastasija Kolskaja.”

“Portrait of the young man with a dog and a parrot.”

“Self-portrait under a dogrose bush.”

“The still life with the peach.”

“The still life with the head of Aphrodite.”

“The Dance Of The Death”

“A Portrait Of Vladimir V. Putin. ”

“The clone and the religion.”

“A Portrait Of Zaur Nurbagandov.”

“The Angel of Seven Churches. ”

“The sketch to the picture «Mama».”

“Tractor operator. The Portrait of Father.”

“The House of Family Life.”

“The Patterns of the Even Date.”

“Stargazer. The sketch to the dyploma work.”

“The naked girl, view from a back”

“"Lengthways on a rainbow" from a diptych "Tsiolkovsky's Worlds"”

“Stargazer. Diploma work (a variant of the picture)”

“Under the starry sky”

“The Strugatsky Brothers "Picnic on the sidelines"”