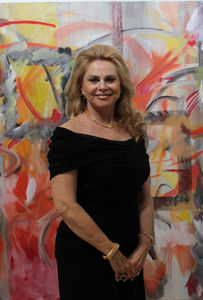 She received her bachelor of science degree in theater and art from The University of Alabama and has continued to study with many accomplished artists and teachers including Professor Gary Sussman at Students Art League of New York, Vytlacil Campus in Sculpture and Sonia De Franceschi at the Accademia D'Arte; Florence, Italy.

She has produced numerous paintings, many of which were commissioned, and has exhibited in many solo and group exhibitions on 4 continents.

The University of Alabama commissioned Susan to create a painting to honor her late professor and life-long mentor, Al Sella. The painting is an impressionistic portrait of the iconic artist and his emblematic bicycle. The large portrait now hangs in the art building, Clark Hall, and is slated to do so in perpetuity.

Susan served on the Art Committee at the United States Sports
Academy for more than 10 years. The USSA attracts and honors
Artists from around the world and is solely responsible for selecting featured artist for the Olympics. She now serves the committee as Artist Emeritus and serves on the Board of Trustees.

She is a member of the Women's Art World organization in Marrakech, Morocco. The WAW's mission is to bring together and promote Women's art in a world of different cultures, languages and art. Today there are 20 countries and 35 artists represented in Women's Art World. She is a member of ICAF (International Culture and Arts Federation) of South Korea; NOMA (New Orleans Museum of Art) in New Orleans, Louisiana (USA); BMOA (Birmingham Museum of Art) in Birmingham, Alabama; Mobile Museum of Art in Mobile, Alabama (USA); Metropolitan Museum of Las Vegas in Las Vegas, Nevada; MOMA (Museum of Modern Art) New York City, New York (USA) and MMOA (Metropolitan Museum of Art) in New York City, New York (USA).

McCollough paints primarily on large canvases, sometimes working on as many as three or four paintings at a time. Her works are Abstract Expressionist in style with freedom of movement, and vibrant, or sometimes, monochromatic colors. She sculpts and paints in oils and acrylics as well as charcoal and ink, pastels, water-colors and mixed media.

This summer, Susan will be celebrating her 5th year in the Gallery and Studio that houses over 50 representative examples of her work. The theme of her Grand Opening was: "Past and Present". She is excited about publicly displaying her work after years of painting, as she says, "For the love of it. I paint from the excitement of the blank canvas. I paint with freedom of inner-feelings, movement, lighting, connection of space, combination of colors, playing with positive and negative space until it all speaks to me." Most days you will find her working in the studio where she welcomes all visitors to her Gallery and Studio. It is located next to the Villas at the McCollough Institute. The Institute is located at 350 Cypress Bend Blvd., Gulf Shores, Alabama 36542. Phone: 251-967-7677

A collection of my new work.

This is a painting that was commissioned for the University of Alabama Performing Arts Event.
The painting, Performing Arts, is an impressionistic representational contemporary pop art piece that depicts the arts at the University of Alabama.
At the top right you have the new structure of the Performing Arts Building with the Old Bryce Building and its two towers in the background.
Then, you have Comedy and Tragedy depicting theatre and the ballet figures depicting dance.
The musical notes depicting music affiliated with the Music Department and the Million Dollar Band.
The art portion, The Mona Lisa and the 17th National Championship depicting the Art of Sport, along with the President’s Mansion and Denny Chimes.
Prints available upon request.