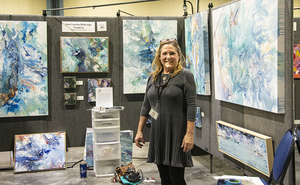 Most recently Jane completed a commission for a new commercial building that is 7' x 7'!
" I have built my process and materials on what I have learned and explored over the decades." Jane has worked 3 dimensionally in found objects, clay and sculptural stained glass as well as 2-dimensionally in drawing, painting and groundbreaking digital media. She now mixes all of that experience into rich visual stories about things she is passionate about.

“Being a creative requires being somewhat fearless. Unafraid to make something new and so different no one understands what it is.” Jane was taught by John Mandel and influenced by Douglas Huebler and John Baldessari, all at Cal Arts, to never repeat what has been done, to do new art. Arthur Turner at the Glassell School of Art, Museum of Fine Arts, Houston, taught her to try multiple mediums, to keep the creative ideas flowing.
Her new studio is in Stuart, Florida. Primarily a painter, Jane also likes to use a varied mixture of pencil, charcoal, acrylics, latex, glazes, inks, watercolor and digital.

Her newest works are represented in the Reflection, Erosion and Alchemy series. She has been painting moving water for decades using various media. She feels these current paintings are the closest she has come to eliciting the paint to tell her story.

She is a licensed boat captain and lived on a boat on a boat with her husband and their dog. They have settled in Stuart where she now has a beautiful studio. Jane is inspired each day by what swims, floats or sails by. She has a profound respect for water. She watches how the water moves, how it sculpts shorelines as well as deposits sand or takes it away.

“I am passionate about the planet, especially the ocean, rivers and bays. I have a profound respect for the power of water and wind.”

I have had a fascination, maybe an obsession, with water for as long as I remember. I prefer to be in it, if not in than on and failing that let me stare at it. Watching my childhood sand castles fall to the continued impertinent rolling in of waves and tide captivated me. It was but a miniature version of what happens all around the globe. I grew up in a small Texas fishing village that was underwater at the hint of a tropical storm, from there I moved to a North Carolina coastal fishing village that went under water with the lunar cycles.

Now, much of the coastal areas of the planet have reason to watch their own erosion, subsidence and the rising tides reshape their world. I believe that those people who do not go out on the ocean and witness it’s power and beauty may not understand what happens with the rushing water borne on a storm.

Currents, tides and runoff change the land, scouring some here, depositing some there. It can be beautiful or terrifying. This can manifest into the magic of an ox-bow forming in a river or a beach house undermined and falling into the ocean.

I greatly admire both Georgia O’Keefe and Judy Chicago for using sensuality in their creations to help communicate their point to the audience. I applaud Frank Bowling who switched from figurative painting to an abstract art touched by personal memory and history. I would like to think that I am following their lead, un-afraid.

The process I am using now incorporates alchemy and fluidity mechanisms that have a strong correlation to the subject matter. I am excited about this new approach to my favorite subject.

I want to share my love of the water, its beauty and preoccupation with its power. I have painted this subject many times in many ways but at each attempt my desire burns hotter to continue to “share what I see.”

The oceans are our treasure

the community of organisms that live on, in, or near the seabed, river, lake, or stream bottom, also known as the benthic zone

“Once Upon a Stream”

the water taketh and the water giveth

“And the Sea Rose Up”

The wave came over the side and slapped my in the face like a cold fish, erasing my complacency.

an aquaduct is man's attempt to replicate God's streams