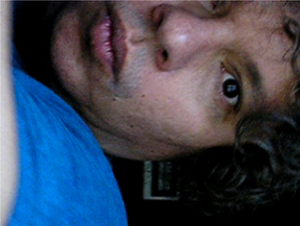 Roberto Echen -rechen- (rechen@rechen.com) was born in Rosario, Argentina.
He studied Engineering until the 5th course (6th was the last one) but he gave it up to devote himself to art. It was about 1981.
Since then rechen has been working on art (on disciplines like painting, etching, video, etc) and exhibiting his works in collective and individual exhibitions in his own country and abroad.
He is a self-taught artist (this is never quite true).
He's got some awards (mostly with his paintings but some other with digital works).
Since 1987 rechen has been teaching Teoria de la Forma (Theory of Forms) Teoria del Color (Theory of Colours) and since 2000 Pintura IV (4th course Painting) at the School of Fine Arts, National University of Rosario. And in 2004 he reached Category 3 as Researcher for the National University of Rosario.
In 1997 (more exactly in November) he started making art with computers. Some time later he incorporated internet with the aim of making art on the net. He made his first web-art exhibition in the year 2000.
Since then he has being building his own website (http://www.rechen.com) with his art works [mostly net-art] and some articles on art.
In 2000 Roberto Echen became Coordinator of Contemporary Art at the Museum of Fine Arts Juan B. Castagnino of Rosario, Argentina. His work included the disign and curation of contemporary art exhibitions and edition of books, catalogs and other issues for the museum.
In 2004 he was engaged in the creation of macro (museo de arte contemporáneo de Rosario - museum of contemporary art of Rosario) and became chief curator for it.
As Castagnino and macro museum became one museum, the Castagnino+macro Museum, Roberto Echen became its chief curator until 2011.
At the present he is the curator for DAA (Departamento de Agenciamientos Artísticos) a department devoted to audio-visual arts at CEC Rosario (Centro de Expresiones Contemporáneas, Centre of Contemporary Expressions).