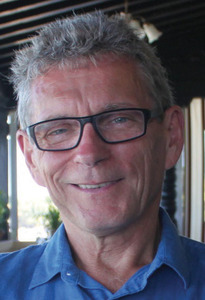 From a large family, I'm a native of Cadillac in Abitibi, north-west of the province of Quebec. I live in the Montreal area since 1969. I'm one of the few artists with coloured pencils in Quebec. Although my dream since childhood to be one day painter's fate takes an entirely different direction. My father, rather than encourage me to develop my talent, de-motivated me by constantly telling me that all painters had died poor and that I wasted my time scribbling needlessly, and that I dream in colour since I spent a lot of time drawing. At the age of sixteen years old, I left school and occupies a first job for three years in a mining company. The years following I constantly changing jobs. Totally disillusioned with my future, I can't find anywhere satisfaction functions I occupies.

After completing training in graphic design at Ahuntsic College in Montreal in 1983, I left for about twenty years of drawing, because I do not believe in my talent. This project from the cradle that seemed stillborn, however, born again in January 2001. It takes a liking to my art after discovering the potential of hitherto unsuspected coloured pencils, a medium that I deserves to be known and recognized. This simple tool that seems aimed at children or at least for beginners, may surprise more than one by its extraordinary possibilities. My challenge is to persist in this choice and to discover the art lovers. Although different, the resulting works are nonetheless just as interesting as those made in oil, acrylic or any other medium. Style rather realistic figurative, I draw mostly landscapes and city streets. My open-minded creativity allows me to explore other subjects as well. My style could evolve or even change should my inspiration lead that way. Self-taught artist, I participated in more symposiums and exhibits at many locations throughout Quebec. We find my paintings in various regions of Quebec and some in the United States.

These drawings were created with coloured pencils from my own photograph toke from different places. There is someone from my country and some other one from various travels I made, like Vietnam and Europa for example.

Sapa is a mountainous region inhabited by many rice fields. There is magnificent views. This inspired me as soon as I saw it and I could not help but take a photo and put it on paper later in the mine of my pencils.

Here its a young vietnamese mother with her baby on her back to Sapa North Vietnam. I catch her with my camera just at the good moment when she turned at me.

“A boat on Mekong”

Here its a boat on the Mekong where they calling the Floating Market. It's a place on the river where all wholesalers, merchants and restaurants owners going to buy fruits and vegetables.

A banian is a type of tree we find in North Vietnam. This one is in the courtyard of the Literature Temple in Hanoï. I was really impress when I saw this tree and I could not past without take a photo and make a drawing with it.

This rower woman was just in front of us on the Swallows River. That was for me a real magic place. It was beautiful and so quiet. We only hear the lapping of the oars and the Vietnamese sneer. I felt in another world.

We find that type of houses in almost all village of North Vietnam. Some say that these houses were built narrow to pay less tax.

This scarves weaver was in Sapa. You see her eyes down is because it wraps the wire around his hands.

The Peggy's Cove Lighthouse is in Nova Scotia. This is where the 2 September 1998, the Swiss Air Flight 111 crashed in the sea, around 7 miles of the village of Peggy's Cove, Nova Scotia, killing all 229 passengers and crew members.

“A door in Alsace”

When I saw that door in little town of Alsace I knew that I would make a drawing of it. I love these old houses slightly damaged by years. I have very good memories of Alsace and picturesque villages of timbered houses.

It's an old door latch of an entrance of a park in Ravello, on Amalfi Coast, Italy.

“A little fountain in Roma”

It's a little fountain in a little street of Roma, Italy.

“House to Split in Croatia”

A house with stone roof in a little street of Split in Croatia.

“A train in Budapest”

It's an old train at Budapest Train Station. There is many old train like that on the rail at this place. Looks like trains of the last World

“A window in Alsace”

A tile window in a little town in Alsace, France.

It's the Granby main street, Granby Quebec. That house is calling " La maison Hortense ". That is the name of Madame Hortense the owner.

Its clotheslines in little street of the old Dubrovnik in Croatia, view from the wall.