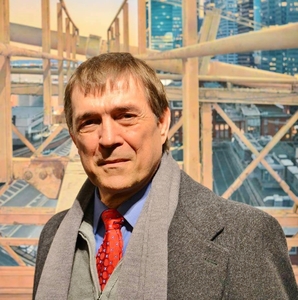 Trained as an artist, earning a Master of Arts from the University of Wisconsin in 1977, I was experiencing success in having my work exhibited in significant national shows, and making sales as well. I spent some time in New York City at New York University working on a series of drawings under the mentorship of fellow artist Don Eddy who has since become a very good friend.

My budding art career was derailed early on by the birth of our first child who was born with significant developmental disabilities. That required a shift in priorities to provide the kind of support that having a developmentally disabled child requires. Over the years that commitment to parenting created a shift farther away from time in the studio and required me to seek employment in other areas. My creative abilities enabled me to move into the emerging personal computing industry in the late 70s as an entrepreneur and co-founding a small tech business focused on disk drives that I ran for 13 years. On a symbolic level, I encountered another seismic shift when climbing Mount Rainier and gaining the perspective that comes from simplifying my existence focusing solely on my rope team’s collective safety. Through that experience came a revelation that I needed to take my current skill set in high tech manufacturing and see if I could work with kids to help them enter the workforce. I created some curriculum ideas and shopped the concepts to local school districts, getting hired in my home district in Gig Harbor

I spent 6 years as an alternative high school teacher delivering a manufacturing technology curriculum that provided a real-world perspective for my students, many of whom are now thriving in this vibrant industry. During these years, I was contacted a few times by companies asking if I was interested in coming to work for them. In 1998 I accepted a job in program management at Microsoft where I continue to work today. Along that path I have co-authored 13 patents, 9 of which have been granted so far and delivered features that are in use by over a billion people, built tools for developers to assist them in creating multilingual apps, and served as the Microsoft Internationalization expert representative to the Worldwide Web Consortium (W3C).

Around 2011, I reconnected with artist Don Eddy on Facebook after decades of sporadic contact by letter and phone. That connection reignited the artist in me who had been pushed aside so long ago, sparking a new series of conversations between us and a renewed passion to make art. And then another major disruption happened in July of that year when I tangled with a John Deere track loader on the side of an Olympic mountain and experienced a near-fatal crush injury to my right foot. Following a self extraction and ultimate rescue chopper flight to Harborview Medical Center, and 7 surgeries to rebuild the mess into what was hoped to be a durable appendage, I started on the long path to recovery. This effort and the time invested in it gifted me with a chance to reflect on my priorities, resulting in a purer, more fundamental understanding that I needed to make art. Period.

In March of 2014 my wife, Connie, and I travelled to New York City where we met with Don Eddy and his wife and artist, Leigh Behnke, our first physical meeting since saying goodbye in 1977. Don has since become famous, yet in many ways we felt like we were picking up right where we left off so long ago. Time in their loft, a dinner, and then attending the opening of his exhibit “Two Realms” at the Nancy Hoffman Gallery in Chelsea served to cement my need, or compulsion to make art as part of the daily fabric of my being. This has driven me to a deep introspection on what my work is about and where I want to take it, reconnecting with my early art and photography and my creative aspirations.

Today I am completing a wonderful studio space on our property in Gig Harbor, Washington where I will be able to spend my time reunited with camera, canvas and paint, a prospect that makes me very excited! I use my cameras and photography skills to capture the world and also paint and do drawings in graphite and colored pencil. I have returned to exhibiting my work and have seen it accepted into a number of national shows. My mission is to create art, to simplify the number of activities in life in order to spend more time in the studio, and create the portfolio that is pent up inside me, eager to come out, and ready to share with others.

I am no longer an artist interrupted.

“Jorge and the U-Haul Trailer”

"B.C. Cannery #2" is from a series shot at a shuttered salmon cannery on the British Columbia coast. I am drawn to the relationship between nature and man, the dance that plays out over time as the forces of nature exert themselves, bringing changes to things made by humans and vice versa. This manifests as a series of photographs, drawings and paintings of machines or structures in environments where the passage and effects of time are evident or implied.