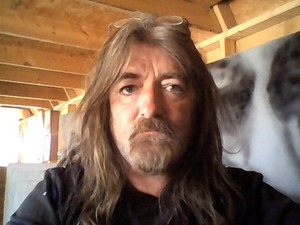 Born in Belfast N Ireland during the conflict, Brians childhood and early adult life became shaped by the images of war that he witnessed on a daily basis. Wounded several times he came to the US in 1998. He joined the US military in Jan 2001 and then 9 11 happened. He served 12 years, including three major Operaiions and overseas service. He medically retired from the military, injured, in 2013 and has been panting since.

His work is soaked in the burden of memory and he uses art as a way to heal. Art not pills, creativity over suicide, pushing the message for all veterans to reach into their inner selves and control the nightmares. Each piece is another step in physically controlling all that he has seen and been through.

His unique style of physically mixing the paint with only his hands on canvas using the organic remnants of war..dirt, tar, oil, ash, wire, stones, nails, metal and bullet casings returns him to the moment of trauma. When he finishes he stands triumphant over his work spiritually, emotionally, mentally. ..resilient and proud.

He has shown all over the US,including Art Expo NY and Spectrum IndianWells. He has been selected to show in the new National Museum of the United States Army opening in 2017.

The Burden Of Memory

Memories do shape us. They are what we are made of off. But what about the hidden memories that lurk deep beneath our surface? The ones our brains suppress and hide deep in our consciousness. Where do they go and why do they rear their ugly heads at a time in our lives when we do not need them to interfere with the present? Is there a way to control them? Find yours..

The Peacelines in Belfast were designed to separate the warring factions thus creating an uneasy fenced in and contained peace. However these were the very flashpoints for some of the worst sectarian violence during the conflict. They divided and conquered. They should have been renamed Piece Lines.

An explosion of political, economic, social and religious intolerance. A physical manifestation of all these things in the form of a IED. The brightest colors ever seen in the monochrome world of war were always blood and the flags that were flown. The very colors that continued to shape the conflict and continue the plight of the innocent.

The playgrounds of children are places for innocence to flourish. A place of daisychains and dress up, of treasure hunts and picnics. Not in a combat zone. The grass and trees are gone, removed forcibly and replaced with the result of war. The only treasure we could ever find were the shiny objects that to a childs eyes seem harmless but to the instigators of violence were the direct result of their initial intention for destruction.

Sometimes you just want to curl up and sleep it all away.

Ardoyne was the small enclave in Belfast where the artist grew up. Surrounded on all sides by "the opposing side" it accounted for over 70% of all the sectarian violence in N Ireland. Outside the childs window was the world of war. The flashes through the curtains at night were not of fireworks or summer storms. The constant noise, smells, sirens and gunfire were not enough to keep the child from the magical world of books. Who needed a flashlight under the covers to illuminate and transport him to another world? It became mundane and commonplace. The constant movement outside provided the stimulus for a future life in abstract expressionism. A way to forget and a way to remember.