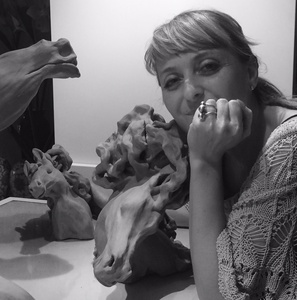 Painter and sculptor born in Livorno in 1974, he studied at the Art School "Cecioni", Livorno, but daughter Art graphical mother and sculptor acquires the rudiments of art since childhood. Every corner of the house had the artistic touch of the mother, the papier-mache in the bathtub to create some sculptures to handmade dolls for her and siblings. He lived in England almost four years and began to exhibit. He continued his education at the foundation "Trossi Uberti" where and 'was a pupil of the master and at the Forge Y.Hidalgo d' art with the master A.Foschini. And 'then passionate sculpture hanging lessons by master Paolo Grigo'. He writes stories and stages (he received his bachelor's degree at the school theater "Laura Ferretti, the artistic center Skyscraper", Livorno). In the works reveal the theatricality 'and love for poetry. He also wrote stories for children, a passion that grew from childhood. the place of origin of the parents, Sardinia and South Africa will leave marks in all its search path. Fond of life and color, through suffering by the illness of his mother, he gained attention for social issues and spiritual. In a review of a solo exhibition at the town of Calcinaia, the master Grigò writes Rachel brings in a tangible sign of the mother, graphic artist and sculptor, who acts as the main theme in the vision of his fantastic world of beauty of flowers, colorful landscapes, portraits where the common denominator is always the moment experimental and innovative, especially from the technical point of view. Precisely in this respect, the artist has consistently pursued his research, intensifying the calibrated color effect is evident in the portraits where the freshness of the signs used in the study sketches that enrich the search for the realization of subjects with other materials, eg. Knights, terracotta bas-relief. Fluid streams in English means continuation fluid but obliged the artistic transmitted from mother to daughter. Clear, 'that this passage between mother and daughter find their expression in the key definite sign of indelible images, determining force of dreamlike dimension in all their work both in painting and in graphic and sculpture .. The countries of origin of the parents Sardinia and South Africa are often a source of inspiration

: My artistic sensibility leads me to give a message about what happens in the world and especially the genocide perpetrated towards Christians, Jews and other religious minorities as part of 'Isis. It happens often in front of us silent and indifferent. However, I can not paint people mangled, private limb. I was struck to the heart this girl fled from Iraq as a result of political changes, where he had lost a brother and other family members. She used to shut himself in the house and painting their faces like to cover what were the scars of his soul.

Welcome misconceptions may seem harmless. In reality, just as the lion fish and scorpion issuing a powerful poison through its dorsal fins, needle-like and its sting is extremely painful, even unhealthy ideas produce wrong actions that turn into bad choices .. ideas may arise in the lead but we can assess them and avoid those that are harmful to take possession of our minds ... and turn them instead in cap denotes an awareness of the love of self.
What we see and 'a woman facing west, the other side of the East where there is the' dawn and 'projection of the beginning of life. His look safe and 'immersed in a marine environment, transparent refers to' water symbol of the emotions and the unconscious, to its transparency, its fluidity and finally change. Why her and 'confident, director and actress of her life. With full knowledge of the self.
Has a shell characterized by strong colors, passion, love. As the reds and oranges. Spines that are as forms of defense but 'projected toward change. No longer afraid to look back. He has metabolized all. As if his soul were centralized at the top of his body .. The armor is not 'in one part of the body that could immobilize, as the mermaid's tail, but and' placed at the top, in the middle from where it begins the direction, the engine of awareness.

it’s a painting of a series of ten women representing slavery to the days today . This woman ' slave of her beauty . This type of slavery results in the non-acceptance of the passage of time and therefore of themselves preferring to resort to surgery to change their appearance and instead capture the beauty that hides all ages .

“a tribute to Modigliani- carboncino”