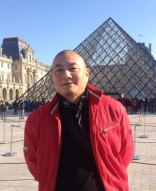 Zhang Zhigang (English name: Zachary Chang) male ,born in 1970, native of Suzhou, Jiangsu Province , is the researcher of China Canvas Creation Research Association , member of Chinese Artists Association and New York Gulf Artists Association of America.He got a further education in China Central Academy of Fine Arts and graduated smoothly.
In 1997, he settled down in Hainan to work on his artistic and cultural enterprise.His works include paintings, sculptures, films ,installations and so on. His works, Liberation Series have been praised and instructed by lots of living Buddhas in Tibet and Qinghai.The film directed by Mr. Zhang , Business Hero which was on behalf of the United Advertising ,attended the 31st session of Mobius Awards.
In 2002,his large stainless steel sculpture works Spiral and Tower was adopted by the Hainan Dr.and Academician industrial park and set up in the industrial park.
In 2003, his works UA won the Chinese Star award for best design
In 2012, he visited Singapore for painting his Spiritual Landscape Series
In Feb.,2014, he was selected to visit New Zealand for painting creation by China Central Academy of Fine Arts and attended the art exchanges in Dunedin National Gallery .
In Oct.,2014 he exhibited oil paintings in Beijing Find Blue exhibition.
In Feb.,2015 he was invited to France to attend the academic exchanges with French Art Committee and several other art institutions.
In May,2015 he took part in the 56th Venice Biennale.( He took part in the joint exhibition artists project of Kenyan Pavilion, namely Independent Venice Biennale.)
In Sep., 2015 he took part in the Los Angels art exhibition for commemorating the 70th anniversary of the victory of the world anti fascist war.
In Feb.,2016 he took part in the art exhibition of Amerasia Bank, New York, America
In Apr.,2016 he was awarded the Topart 2015 Annual Chinese Artist Prize ( One of top ten Chinese artists of Comprehensive materials.)