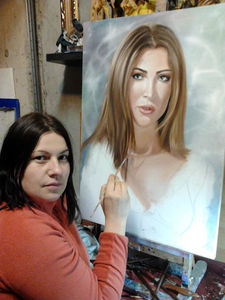 Olena Khudoley and the magic of the Art Fantasy

Great technical-formal ability, refined elegance of the line and extreme chromatic pleasantness, besides a serene and delicate poetic vein: these are the peculiar characteristics of a young artist, already affirmed, on the road to success in the field of painting.
We are talking about Olena Khudoley, native of Sumy in Ukraine, where she was born on April 30th, 1977 from a family of artists: her grandmother a valid portraitist, her grandfather an artist of works in wood, her father a musician and her mother a photographer. The artist, who lives in Almé (province of Bergamo) since 2000, was able to amalgamate, in the best way, a strong predisposition to the art and the beauty and rediscovered, above all, since she was 12 years old by a serious and meticulous study improved in a school of art in Ukraine (attended for four years) and, then, from 2009 in the school of drawing and painting "Bottega dell'Arte " in Missaglia (Lecco), directed by the internationally renowned Gerry Scaccabarozzi.

Even the Italian and international numerous exhibitions of painting were important for Olena Khudoley, to which she participated in these last years and that increased and enriched her artistic and cultural baggage and her communicative experience, that is: from Almé to Calusco d'Adda (Bergamo) and in the art galleries in Milan, at Paestum in Campania (Salerno), from Castello Brianza to Sirtori, from Missaglia to Monticello Brianza and to the art fair in Forlì, to Porto Viro (Rovigo), to Bergamo in the library “Caversazzi”, at Dalmine and Orbassano (Turin) at the "Rassegna Internazionale d’Arte Espressiva”; all these localities in the province of Lecco, as regards Italy, but even the French exhibitions in Roquebrune-sur-Argens in Côte d'Azur, at Linas (in the outskirts of Paris) and none other than the important “Exposition International d’Art Contemporain” at the Carrousel du Louvre from October 25 till October 27, 2013. As well as important are for her the appearances, with excellent results, during prestigious competitions such as "Premio Agazzi " at Mapello (province of Bergamo) and " Fiordimiss" at Cisano sul Neva, and the "Most Popular" on the web, as well as quotes and articles on websites and newspapers such as L'Eco di Bergamo, Il Punto Stampa, Casateonline, Bergamonews, Tuttarteonline, Channel 11, Channel Italia and TG Events.

Olena Khudoley realizes, with the oil technique, enchanting landscapes and original still lifes, intense and catchy at the same time, but she expresses her strong and overflowing personality and her uncommon temperament, both on a human and artistic level, particularly in the representation of the human figure, realizing hyper-realistic details and typical dreamlike suggestions of the best surrealism, especially in a singular fantasy vision of reality, both inner and outer, full of symbolic meanings.

Of note, among the many works worthy of mention in recent times, "The thinker" in monochrome blue and "The Temple of Neptune", both classical in form and modern for the chromatism, the sensual "Imagination", the heartfelt and demanding "Motherhood" and "The drop of life", all works realized in 2010; then again “The swan lake", of great sweetness and authentic brilliance, "The salvation of the Earth", with a full-bodied God - the Creator of the Universe - in monochrome blue, and a blessing "Jesus” of highest making and magnetic gaze, accompanied by two intriguing and delightful angels; these works have been realized in 2011.
The artist, view also the young age, has still margins to further increase the quality of her work; however she has already reached so far results of absolute value and purposes of great prestige.