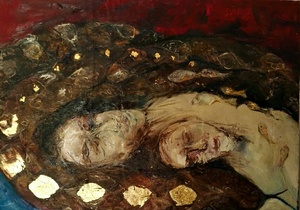 my last series focused on Pine Cones . . . during that period I went through many changes in my personal life. While on vacation in Italy, I was astonished to see in front of my eyes, in the Vatican’s courtyard, a huge bronze statue from the third century AD. Also, the name given to the gland in the center of the brain is the Pine Cone Gland, which represents the Holy Pine Cone is the place where the third eye appears in ancient Egyptian scrolls. The Greek mystics walked around holding wood canes topped with Pine Cones, to facilitate communications with the gods. I was not aware of this information when I created the series. But it seems that this information is part of this unconscious human stockpile of symbols, which I share with the rest of humankind.