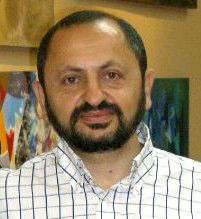 Alexander Sadoyan was born in 1954 Yerevan, Armenia. In 1975 he graduated from Terlemezian Art College of Fine Arts. Sadoyan participated in more than 100 exhibitions around the world.

Today, his works can be found in private collections throughout USA, France, Germany, Canada, England, Italy, Japan, Russia, Switzerland, Korea,China, Norway and Lebanon. Since 1990 he is a member of the Artist’s Union of the Republic of Armenia. In 1995 he was accepted as a member of the International Association of Artists at UNESCO. His artworks has been published in Art World News, World Art Celebrities Journal (Berlin) Art Business,ArtScene,Art&Frame Review,

Armenian Art magazines,cataloges and many newspapers. He was chosen artist of the month(Worldartcelebtitiesjournal)2003 Digital Color Awards(2008)Art'Majeur Silver awards(2007)Best of the Artists(2008)Kennedy publishing. Since 1996 Alexander resides in Los Angeles, California. He continues to create vigorously and actively displays his paintings at personal and group exhibitions.

“The light glows in the darkness”