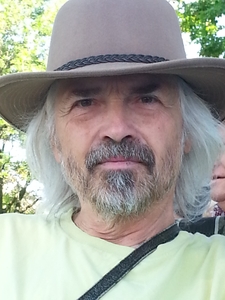 Terry Golletz Biography
Terry was born in 1948 in Kitchener, Ontario, and raised in Preston (now Cambridge.)
In the early 70's, he completed two years at the University of Waterloo majoring in the study of Eastern Religions.
In 1981 he graduated from The Ontario College of Art and finished his B.A. at the University of Guelph with a Fine Arts major.

Terry has been actively producing and showing his art since 1981 with galleries around Southern Ontario including in Toronto, Mississauga, Oakville, Guelph, Cambridge, Peterborough, Whitby, Flesherton, Owen Sound, Meaford and Fergus/Elora. He has also ventured into the US with a gallery in Royal Oak Michigan near Detroit with two one man shows in 1983 and 1985 and a showing at Madison Square Garden in New York City in 1982.

From 1987-1989, Terry took employment as the Museum Designer and Preparator at the Wellington County Museum. Here he designed and constructed their permanent exhibits, which normally have a 15 year life. A log cabin of his construction is still living at the museum.
From 1989 to 2001, Terry became a high school teacher, finishing his B.Ed. and teaching Communications Technology (the graphic arts) and Fine Art.
He retired from teaching in 2001 to better pursue his love of art and music.

Although his formal training is in art, music has been a part of Terry's life from the age of 12. At that time he discovered his father's banjo/mandolin. Music has always been his way of relaxing and shutting off the world around him. This took a giant leap forward when Terry started to attend open stages in 1995. Terry has played as a solo performer, in duos, and as part of bands. He is currently performing with a Traditional Ukrainian Folk Ensemble - ZUBRIVKA, playing at festivals around southern Ontario.

Terry is currently living in Elora Ont. with his wife Lynda.

In my work, which is currently in acrylic paint on paper or canvas, I am attempting to express the happier more playful side of surrealism. I refer to my work as "Abstract Surrealism." Each painting has its own evolution. My concern is in creating a unified composition of colour and form which allows maximum participation of the viewer in the art work. Since the form does not represent an image that the viewer can immediately recognize and label, they are allowed to look inward to themselves to create with their own imaginations whatever their current mood moves them to create.
I spent a number of years after art college, painting/drawing with water colours and conte, and sometimes pastels.
My work falls somewhat in line with AUTOMATSM, a method of painting (or writing) used by surrealists, that depends on the re-emergence of subconscious images. In applying chance or accidents to mark-making, the painting is to some extent freed of rational control. Hence the painting produced may be attributed in part to the subconscious. As like the work pioneered by Andre Masson, my work involves both unconscious and conscious activity.

Apophenia is the experience of perceiving patterns or connections in random data, the human tendency to seek patterns in random information in general. Pareidolia is a type of apophenia involving the perception of images in random stimuli, like seeing images of animals or faces in clouds.

“Asleep at the Opera”

“A Place to Hide”

“No Place to Rest”