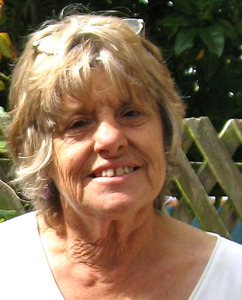 Born in 1940 in the picturesque seaside town of Kaikoura, New Zealand, Audrey grew up with a love of the country that surrounded her, the mountains that met the sea and the rural landscapes together with the people that worked in these environments. She showed early promise with drawing and painting, finally making a career of teaching Art where she was known for her ability to bring out the inner creative capabilities of her students, encouraging them in their own style of work. She taught for thirty years at secondary and tertiary level in New Zealand, Canada and most recently in Zimbabwe. Since returning to New Zealand she has held an exhibition in Wellington and tutored several 2-day workshops. Her colourful works in oils, acrylics and stained glass are in many homes world-wide.

This series of farming scenes began as I observed the behaviours of sheep in a mob, how they reacted to and responded to those that work with them, both human and animal. New Zealand has many breeds of sheep, but our merinos have the ability to thrive in a hostile mountain environment and produce an amazingly fine wool, sought by fashion houses world-wide. It is the sheep's human-like characteristics that I wanted to portray, remembering a certain teacher who said that we are all like sheep, and he as the Good Shepherd loves every one of us, the risk-takers, the wary, the leaders, the followers and those just desiring rest.

Merino sheep in the big country of the McKenzie basin, New Zealand

Autumn colour on a North Island farm, near Feilding NZ.

Autumn colour on a North Island farm, near Feilding NZ.

“Sure feet on Rocky Ground”

The Three Girls – their stories
Hilda
Hilda is a part-maori girl who lives in Akaroa on the Banks Peninsula of the South Island of New Zealand. She is related to my daughter-in-law and it was at my son's wedding to Areana in 2002 that I first met Hilda who had recently married a talented maori master carver. She was blissfully happy. The next time I saw her was 6 years later at the wedding of Areana's sister. She was by herself and things had changed. I have painted her holding on to a vacant chair because her lover had gone, captivated by another. The little cottage decaying on a hillside represents her dreams of family life, wrecked by the circumstances that had been her lot. Yet, I sensed a strength in her I'd not seen before, and as she turned to face the future, she displays a hope of something lasting and more precious to come. Indeed, that is the case, she is now the mother of twin boys.

Melissa
Melissa became the cook at River Valley Tourist Lodge in Taihape, New Zealand. I painted her at a turning point in her life and show her contemplation as she is seated beside the river that has been such a huge part of her life. But, life is not a constant, change for her was occurring and she had decisions to make. Hers was to leave the river where she was born and had been raised and go to Europe, seeking to discover just who the real Melissa was. She has since returned and is about to become a mother, a role she is eagerly looking forward to.

Rose
I met Rose during a water-painting course and have entitled this painting, 'It's getting late, Rose.' She was completely absorbed in her work. The afternoon sun cast a reflecting glow from the paper to her features, otherwise shadowed by the brim of her hat and this seemed to enhance the deep enjoyment she was getting from the action of painting.

There appears to be a conversation between these three girls that involves the viewer and I’m very pleased that they were sold to a resident of Hamburg, Germany who continues to exhibit them together .