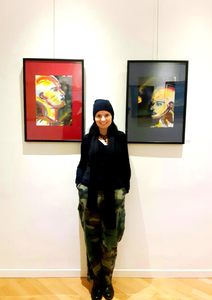 The passion for painting appears in the younger age, since then focused on the human being. Except of a few experiments it stayed to this topic.

A preference to liquid colors and its own dynamic, brought by the functional interaction of eyes and haptic perception to a form, is recognisably in the artwork, which showed in former national and international exhibitions. So it seems natural, aquarelle painting takes up much space in the artistic realization. Also the surface character is a important factor at the informal – intuitive painting process. Beside this alienation various materials as kraft and parchment paper and plaster is used and even collages made from aquarelle fragments arise.

One more field of attention ist the painting with acryl on canvas or at large size on wooden panel. The surface condition produced with primer plays a big role for the color gradient during the implementation. Often a brute technique is used to give the paintings a transparency, lightness and ruinous character while unstick the color partial.

The technique corresponds contentual with the artwork, which avail the metaphor of the innards, the mystery, the human being between the tension of deep emotions and vehemence. Spiritual abyss, inner psychic shall elucidated to the outside, the personality structure, which constitutes the human being, the unspeakable shall be transformed to a visualized language, so that might be the reason, others often say, the paintings reminds to dream sequences.