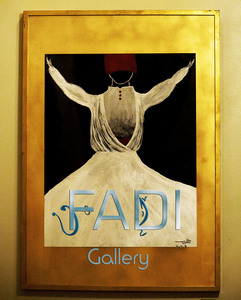 I am a Syrian young artist with little experience, student for one year at technical institute of applied art major ceramic. I am currently located in Atlanta GA, I love doing creative new ideas with ceramic, wood, metal and so many recycle materials. I like to represent Syrian history and recreate historic monuments and sculptures.

The Queen of the Empire

this golden sculpture is made from ceramic placed on a wooden black frame is presenting Zenobia the Queen of palmyrene Empire."she was the 3rd-century Queen of the Palmyrene Empire in Syria who led a famous revolt against the Roman Empire. The second wife of King Septimius Odaenathus, Zenobia became queen of the Palmyrene Empire following Odaenathus' death in 267. By 269, Zenobia had expanded the empire, conquering Egypt and expelling the Roman prefect, Tenagino Probus, who was beheaded after he led an attempt to recapture the territory. She ruled over Egypt until 271, when she was defeated and taken as a hostage to Rome by Emperor Aurelian" (Wikimedia) but she refused and she poisoned herself to death.