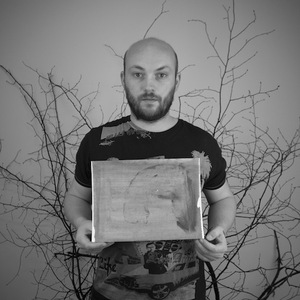 artist statement
In my work I have been dealing with processual emergence of painting in several meaningful series. In my series ”Space and Move” I was working with the time of a stroke, illustrating process of creation of a painting. In a formal way I was searching for options of different use of materials in classical painting on canvas. In the case of a series Space and Move it meant use of asphalt to typify a brush stroke to build an elementary space and to layer him in process of time. After a time I realized through my own creations that too much theorization of painting as a media becomes often a barrier between the author and his intuition. When I started to collect sketches for my next project of everyday space I became a totally convinced to divert from a classical conceptual approach to fine arts. These sketches convinced me of their importance and self-sufficiency, as in the terms of media and also as the final result of artistic process.
In my current creation I focus on perception and non-perception of human everydayness.
Experiences, which are recorded in our subconsciousness and stay deep in us, often come out in the most unexpected situations. My works also talk about freedom and purposeful, consistent artistic work. In the last drawings and paintings I’m pointing to the ratio of order and chaos, perceived and inner individually determined world. Intuition used together with perspective of educated drawing is here maturing into motives of solid contours of uncertain existence and frustration.
Every time I begin an artistic activity, I have quite precise imagination of the move I want to form in the final work. Although in the result I incline to the text of R. Shifft about T. Pils, that the great success happens when the author manages to give into this work a part of his everyday experiences which let the painter loosen up from own history and surroundings. I also refer to R. Brodo, who also had a significant influence with his approach to anticipated and depicited, or void and formal richness. From a theory I refer to J.L. Borgese, G. Delueze till S. Freud in the context of surrealism and therefore A. Breton. I try to approach some of modernistic visons in the framework of post-conceptual context and post-conceptual aesthetics.