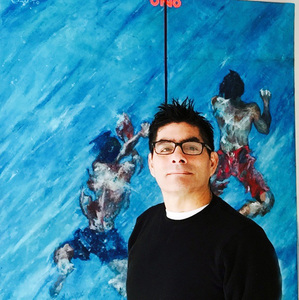 YNOTngl.com
Angel Diaz is a creative mind with vast and diverse experience within the media and fine arts industry. He’s originally from Iquitos – Peru and in the late 1980s established residence in New York City. He holds a B.A. in Commercial and Plastic arts, received from the School of Visual Arts. He has an MA in Media Ecology from NYU’s School of Communications. He currently lives and works in the Big Apple.

Angel’s media works appear in several publications, broadcast and advertising products. His plastic arts works can be found in a myriad of public and private art collections both in the United States and abroad, and have been seen worldwide. Some of his paintings are currently shown at the “FACISM” exhibit at The Whitney Museum of Arts, of MA. His large mixed medium on canvas, entitled “ONE” is part of the permanent collection of the “Museo Amazonico”, in his native hometown. His paintings are in numerous private collections. They have also been in national and international auctions for charitable events organizations such as: Cipriani’s restaurateurs, In–New York Magazine, New York Waterways, The Big Apple Greeter, The Brooklyn Community Services, The Hats of East New York,

The works chosen for this group are reflections of diverse social and prosaic topics. With an unconventional approach their controversial imagery and techniques, are purposely chosen to tap into the viewers minds and bring attention to their original topic.

During the nineties, world hunger, poverty, and child abuse in African countries have been a heavily covered subject in the media. Aid for Africa and for the poor became an easy accessible commodity for celebrities and some media groups to gain immediate national and international exposure for their products. Fundraising events, came to life all over our society shadowing and forgetting the very needs of the children they were meant to help.

The central message of this image is embodied in a number of symbolic numeric equations of multiples of 4 and 6, as well as geometric formations of squares and circles. The numbers 4 and 6 symbolizing stability and harmonious balance. There are 3 pairs of images in the composition: 2 children, 2 pots and 2 cherubim.

The aerial perspective is purposely used to give the viewer a sense of intimacy while still maintaining distance from the subjects.

Sitting on top of this perfectly square canvas are two light skinned Cherubim. They crown the image and appear to be like night watchmen guarding the sleeping innocents below. The children sleep on a hard, decrepit tiled floor after what appears to be a feast. They wear similar garments of opposing colors.

Their curled bodies fill most of the central part of the surface and appear to be peacefully at rest, oblivious to the observer. We the onlookers stand aside and do nothing.

On the bottom part of the square are 2 almost empty pots. One pot is larger and less full than the other. The large one sits on the right side and is grasped by one of the children, and appear to be empty.

The purpose of this image is to bring awareness to the social issues of world hunger, poverty and child abandonment that are widely covered by the media, yet overlooked.

During the nineties, USA troops led a number of invasions throughout various countries around the world. To justify this, the USA (led by president George Bush Jr.) self proclaimed our country, as the guardian of worldwide democracy.

Intended originally as a short-term demonstration of North American power and influence, some of the invasions (like the Iraq war) took longer and brought chaos and destruction to the invaded countries, leaving a trail of turmoil and disruption in their wake. This chaotic aftermath has many similar and familiar parallels in history.

This work is a reflection of that moment within our history…. A perfect, 48” x 48”, square creates a number of circular and rectangular elements depicting symbolic and numerical references of intrusion. Moving from top to bottom familiar symbols confront the viewer. As one travels through the images a path of apocalyptic destruction is revealed. Despite this, the bright yellow box at journeys end contains a message of hope.

From the top left corner13 holes carve a path to the right. These holes are broken into two groups, representing grace (#5) and “new beginnings” (#8). The first group of holes is hollow showing their original state. Rays of light crown them. The other groups of eight are filled with corroded one-dollar bills to represent the power of imperialism.

At the top center, three single sheets rise above the central composition. The center sheet shows President George Bush Jr. as “Person of the Year” on the cover of Time Magazine 2004 who is flanked by two translucent sheets. The left one has the word DEMOCRAZY imprinted in all caps. The right one depicts a world map with a directional arrow pointing downward towards a path of flaming fire over a spinning wheel containing a swastika.

The symbol and the colors of the German National Socialist Party are purposely used to evoke the fear and terror associated with historical human rights violations.

The heart of the swastika is a Texas insignia. Three mirrors, sit on top of both images. They are positioned in a Trinitarian formation at viewer level, in order to reflect the viewer's image and to make the viewer an active participant.

At the bottom right of the composition is a “Banana Republic” sign - the aftermath of intrusive policies. It is slightly corroded by the images above; however, hope and endurance are represented by a golden bright yellow hue.

Although this paining is filled with negative connotations, it aims to create awareness of otherwise often overlooked social and human rights issues as well as political decisions and their devastating consequences.

Early in 2005, Christo and Jeanne Claude started installing a gargantuan project called “ The Gates” in NYC Central Park. 7,503 gates with their free-hanging saffron colored fabric panels seemed like a golden river appearing and disappearing through the bare branches of the trees. This project was being built right in my back yard; therefore I followed its construction from a very close range. While construction was in progress, I ran into Christo and Jeanne Claude. They were checking on the recently placed steel bases along the pathways. Two standing fluorescent orange plastic brackets guarded each base.
During our brief encounter we talked about the magnitude of his project and world peace. I mentioned my artistic works and their purposes and commented on the beauty of the project and the brightness of the brackets. To my surprise he graciously handed me a bracket and told me to take as many as I needed. To serve my purpose I took two more for my next project.

A spectrum of primary colors serves as a backdrop to a white swastika, shown in its original ancient squared position. The heart of the imagery is a glass globe of the world and the three bright fluorescent orange –propeller like– brackets call attention to it. The swastika is rotating, smearing the colors to represent diversity leaving a circular footprint.

The word “imagine” sits in the top center of the painting. The word tilts to the right to echo the motion of the rotating brackets. It aims to represent a utopian world of peace and harmony living within the cosmic rhythm of the universe.

“Imagine" is a work that is perhaps a continuation of our brief encounter. I chose the swastika because it is a very old symbol traditionally viewed as a sign of peace, good fortune and well being amongst several cultures around the world. It is a symbol in both Judaism and Buddhism, as well as a Nordic runic emblem and a Navajo sign. It aims to talk about peace from an historical and chronological perspective. I wanted to bring attention to the benign origins of this ancient symbol and how it can be used for its original positive purpose.

Since WW II the USA has been the ambassador for world peace and democracy. It is the emblem that has become our "product". This product has become packaged and sold for various self - serving purposes.

This product that we package and sell is embodied in this kaleidoscopic representation of a peace symbol. A bright green image of a peace symbol lies on top of an obscure surface. The circular shape is in the center of a perfect square. As the fluorescent green color of the peace symbol travels downward, it changes the background colors in order to represent movement and diversity.

A melting image of a USA flag serves as backdrop for the top part of the composition. Red and black stripes calmly cross the bottom part of it suggesting an African American version of the USA flag.

At the center of the peace symbol, three small red circles are stacked in a Trinitarian formation, guarding the overall symbolism of the message.

From the bottom, a victory (V) symbol rises and preserves the original colors of the symbol.

This image aims to bring awareness of the many ramifications that USA politics have had over our world cultures.

During the eighties and nineties, HIV/AIDS had spread worldwide. The disease became the subject of many religious, political and social controversies. Since its identification, it garnered international medical and political attention as well as large-scale funding. It was a time when the future was uncertain. Chaos and social change affected the lives of the young and beautiful gay men - like the fragile beauty of the tea roses represented on this work.

The images are depicted on two (diptych) separate canvases. The first one, viewed upwards, depicts a cross-like shape; and viewed downwards emulates a phallic .
The second part of the diptych is one perfect square foot, representing a solid unknown deadly force, one inch away, ready to take siege and invade the central image.

A crystal vase containing the image of a dozen hybrid tea 'Ophelia’ tea roses, in various stages of withering and dying, are positioned in the center of the main surface. These twelve pink roses are spread across the top, occupying three (3) different panes.

The upper part of the panes echoes a pyramid like shape, symbolizing the "divine trinity". The top pane crowns the image while the other bottom two, cling to each other -bound by a small piece of transparent (band aid like) tape.

The roses are dispersed symbolically in groups, within the different panes.
The center one contains five roses, symbolizing grace and acceptance. They are depicted in a clear blue background. The left pane visually depicts five roses, against a darker blue background. However, upon closer inspection, it reveals the loneliness of a single rose; the others truly belong to other panes and are transitioning both in and out of the pane. The right one depicts the dual aspects of life - the yin and yang of Life. Two roses sit in the center of a perfect square embracing each other. Although the background is corroded and tainted they appear to be calm and solid.

The crystal vase is filled with murky waters contaminated by an unknown substance rising from the bottom. While the bottom part of the vase shows tainted waters, the upper crystal rim shines iridescently even though it holds a wilted, single rose; it hangs dead and alone.

The bottom pane aims to represent the virus enclosed in a perfect square smeared by a fluorescent substance. It metastasizes upwards tainting and corrupting the images on top.