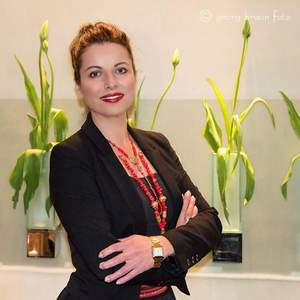 23.09.1970 Born in Arad/Transylvania
1984 - 1987 Education at the Art School Academy in Arad
1988 - 1991 Study of Painting at Prof. Königshoff in Giessen / Germany
1991 - 1999 Study of Computer Sciences and Medicine at the Christian Albrechts University in Kiel Specialized in Neuronal Networks and Artificial Intelligence
Graduation with summa cum laude
After Graduation work in research, neurophysiology, brain research, polar ecology
2000 - 2002 International Project Manager at AOL/Time Warner, CompuServe, Netscape
2003 - 2004 Study of Psychology, Approbation (HPG)
Graduation in the top 10%
2009 - 2010 Study of Painting at the american photorealistic painter Earn Kollar in Munich / Germany
2016 - 2017 Study of drawing at the Akademie der Bildenden Künste in Munich
Since 2004 Ramona Romanu lives and works full-time as an artist in Munich / Germany

Inspiration:
Her art work is inspired by human perception and its correlation with nature.

For her abstract series she created the term Quantum art, in the meaning of a bridge between science and art.

For the big sized „Rorschach“ series, a psychoanalytical test that had been used by Sigmund Freud to make the unconscious visible and interpretable, she paints over 7 ft wide mirrored and symmetric paintings in oil on canvas as symbols for the left and right brain hemispheres. The viewer is invited to follow his own perception and to make his own interpretation of the motive. For this series she dilutes the oil paint in a way, to make it look like water colors - light and transparent, applied in many layers to give it profoundness.

The paintings from the series „Abstract Neuronal Network“, with over 20 squared works, are mostly monochromatic and they show the clusters that has been observed in the neuronal networks. She did not put her signature on those paintings, with regard to the number of permutations in which a square picture can be shown. Here we have (at least) 8 possibilities (4 sides and 4 corners) to present a painting, by rotating it in 45 degrees.

In her figurative works she focuses on underwater worlds, Japanese koi paintings and portraits of traditional geishas. 2005 she started the series „Underwater ladies“.
Since 2014 she started a new figurative series with little figures, always with an umbrella, positioned in wide spaces with depth.

Techniques:
Her main technique is oil on canvas and she also experiments with indian ink and coffee for the drawings and paintings in the „Paperwork“ series. For some works in the „Organic“ series, she uses both, acrylic and oil paint.