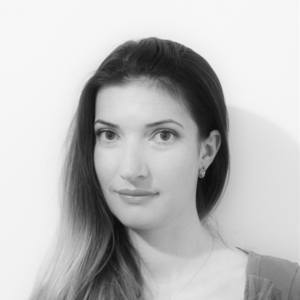 In her paintings, Tiziana Fejzullaj focuses on the mysterious nature of the human figure. Working in oils and acrylics on canvas, she creates images of women and men in which her bold take on color, texture, and composition turns that essential mystery into something thoroughly compelling. Tiziana does not depend on faces to give each subject a distinctive mood and personality. Rather, she tells her stories through the positioning of the body, the lines used to depict it, and backgrounds that range from dense patterns of drips and energetic brushstrokes to fields of solid color. She mainly uses the human figure as subject, which is mysterious in its nature. It is not just a face to a body, it is about the body itself conveying the beauty it has. Sometimes rendering muscles and skin in vivid detail, and at others showing the human figure as an exercise in pure form, Tiziana unifies her works through a sharp ability to capture the body’s proportions and poses, and a constant awareness of the mix of male and female energies within each figure. She uses the female figure as inspiration in most of her creations, and she often uses the male figure to challenge the traditional objectification of women. Tiziana loves the mystique and the female instinct inside men. When combined with her striking color palette, the result is a dynamic, varied world with a powerful physical presence. Tiziana was born in Albania. She studied in the Academy of Fine Arts in Tirana University, and she received her Master’s in Fine Arts from University of Prishtina, Kosova. Tiziana Fejzullaj lives and works in New York City. Less

“Leaning by the Tree”

“Nude in a Poppy Field”