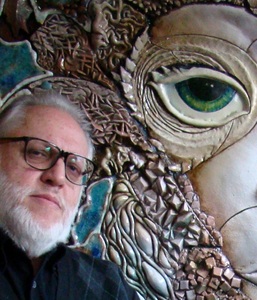 VALDIF (Miguel F. Valdivieso) Painter, ceramist, muralist. Born in Granada (Spain) in 1952. Completely self-taught painter, Valdif is an outlier with a long history of contribution of great artistic interest and in many cases using techniques themselves, innovate and playing different styles, and whose works have been commissioned, exhibited and sold through different channels generally to regular exhibition in art galleries. Shows his first solo exhibition al Art Center in Granada in 1975, which followed several solo and group exhibition in many Spanish cities…but gradually departs from these circuits. Valdif developed in 1980 a technique based on marble sands allow his role muralist. The visual impact of his works it takes professionally and performing custom murals and original works for building entrances, hotels, etc. It moves in the world of construction and decorating firms.
In 1992 opens his ceramic workshop. His work until 2011 is based on a new technique in which develops an evolution of ancient friezes of oriental and Arabic inspiration. These compositions provide new developments, new studies, new materials, and even geometric contributions
In 2009 rushing a new creative project that brings a new technique, unreleased in the art scene. His works are a fusion of two disciplines: sculpture in the form of reliefs formed by ceramic pieces strung painted with glazes fire and traditional painting in the funds, as these reliefs include the reason for the composition, but gone are the rooms painted and textured on canvas. Both techniques together create compositions that address a surreal and abstract themes. Addresses essential searches ranging from ancient esoteric elements, geometric studies on the mineral and organic matter, recreating other life forms ....
Valdif has made many exhibitions in galleries and 11 international fairs, and worked for hall buildings and hotels in various countries.
Recent years spent working in his paintings, to gather sufficient number of works for a major exhibition. Each requires many months of work.
In 2013 Valdif returns to the art galleries world with his new works, in collective exhibitions in Ahaf Seoul. (South Korea), Art Cuestion Orense (Spain) and in 2016 individual exhibition in El Centro Artístico Literario y Científico de Granada, with great notoriety, by the criticism of art, the press and television. His work will be on the cover and inside of the 2017 yearbook of international H.T. Art Magazine, and also in the 2017 yearbook published by critics and Greek artist Katerina N. Theofilis.

New technique of terracotta and ceramic in relief
Original, but Arabic and oriental inspiration. The works are formed with hundreds of pieces of 5.5 cm. In relief, made of clay to the fire to 1050 gº.
Terracotta: finishing of color with acrylic paints and treatments of
aging.
Ceramics: Color finish with ceramic enamels on fire