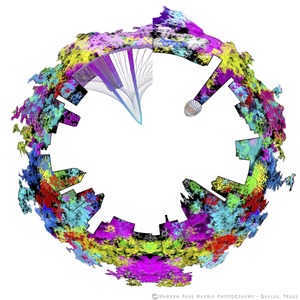 What a long, strange trip it's been...

At the age of 14, Mr. Harris was taught the fundamentals of film processing by his father, who learned the discipline while serving in the U.S. Navy during WW II. Processing his own film enabled Warren to explore photography with fewer financial limitations and utilize more creative printing techniques. While living in the Los Angeles area he enrolled in a photography correspondence course in 1970, picking up some valuable film processing and printing techniques as well as learning composition and exposure through his assignments.

He bought his first 35mm SLR camera, a Praktica IV-F, in 1970, graduating to Nikkormat cameras and Nikkor lenses in 1973. After the 1971 earthquake that brought Southern California to a standstill, the widespread loss of power (and insomnia brought about by abundant aftershocks), encouraged Mr. Harris to explore time-exposure photography for the first time.

Working as a Technical Engineer for Motown Records and having friends throughout the entertainment industry opened the doors to live performance photography, which proved to be a natural fit along with his exposure at an early age to the psychedelic music scene in San Francisco during the mid”to-late 1960s. This, combined with Warren's background as a guitarist since the age of 14 - and a roadie with The Grateful Dead in 1968, (hence the quote at the beginning of this bio) proved to be a perfect training ground for Rock 'n Roll photography. He has photographed Sly Stone, Ozzy Osbourne, Metallica, Drowning Pool, Ted Nugent, Randy Travis and 3 Doors Down, to name a just a few.

Moving his family back to Marin County in 1975, Mr. Harris began his career as a Recording Engineer, working with numerous local and national artists, photographing their performances and promo materials, and honing his photographic skills.

In 1981, with increased fiscal responsibilities, Mr. Harris, as he puts it “hung up his cameras” to pursue a more lucrative career in the technical field, opening AudioCraft Engineering, and operating it for 6 years. Needing a change of environment, he joined Symantec Corporation as a Technical Marketing Specialist, for three years before opening his own computer consulting firm in 1994, which he relocated to Plano, Texas in 1999.

Mr. Harris credits an art class taken in Marin County in 1992, with vastly improving his appreciation of art and his compositional skills, while confirming his long-held belief in an inability to draw anything recognizable.

An epiphany in 2006, caused him to re-embrace his first love of photography, acquire new digital equipment, and attack the art form with a vengeance, determined to make up for what he feels is “lost time”. Never without a camera, Warren captures new images for his collection on a regular basis and has embraced digital manipulation to create his frequently dark and other-worldly images. In spite of being advised by a multitude of friends and relatives that “There is nothing to see in Texas.”, Warren pursues the obscure and fascinating beauty he finds throughout the vast expanse of the Lone Star State.

A love of cemeteries causes him to explore any necropolis he stumbles upon in his travels. Warren has been making a concerted effort to explore, photograph and document obscure and historic graveyards that dot the Texas landscape as well as any he happens upon in his world travels.Â www.necropoliscreep.net is the website featuring these collections.

In 2007, a local photographer evaluating Warren's portfolio as a favor, pointed out “you have an interesting desolation theme going there.” which was interesting to Mr. Harris, as he had not consciously pursued this style. This statement, however, opened his eyes to his own attraction to abandoned buildings, vehicles and the like. Upon some introspection, he found it to be absolutely true that these scenes had always attracted him, which set him on the path to fill out his library of desolation images.www.desolationimages.com is a project dedicated exclusively to this theme.

In 2010, Mr. Harris sold his computer consulting firm to dedicate more time to photography. This allowed him to relocate his studio closer to home in Frisco, Texas, which he uses for commercial assignments, fashion and glamour photography and a creative outlet for his own projects. He is putting his newfound free time to very good use traveling with his wife, while collecting new images for varying themes. In development are several coffee table books, the first of which, Texas As I See It, was published by Brown Books in November 2011 and reprinted in March 2018.

He has freelanced for local newspapers and magazines as well as international publications over the years. Warren shoots freelance projects for local businesses and government offices, participates in art shows and has found a new love of High School sports through his coverage of these games for several newspapers. His work is on permanent display in City buildings, Frisco Square, Ebby Halliday offices and in the homes of local collectors across the Metroplex.

Referred to as a “Renaissance Man” on more than a few occasions, Mr. Harris loves cabinet making, welding, playing guitar, creating various projects (his wife has a custom, lighted shoe closet to prove it) and is as comfortable with electricity and electronics as he is with woodworking, plumbing, construction and plastic fabrication. He is an Amateur Radio operator and is active in the local storm spotter network. As early as his twenties, Warren was an accomplished calligrapher, a skill taught to him by a close friend in 1989. He has done some acting for commercials, local productions and a Korean Mini-Series, and enjoyed a minor career in the Voiceover field.

In a departure from photography, Mr. Harris has been exploring the creation of abstract digital art, some of which can be found at vividpixelz.net

Mr. Harris was also part of the team that created the first computerized house in Tiburon, California in 1983, interfacing all the computer systems, security and optical light collection devices. Warren also worked on the prototypes of the first digital 3D goggles while freelancing for StereoGraphics in San Rafael, California. He designed and built (or retrofitted) numerous recording studios over Northern California, including MC Hammer's recording studio and custom home featured in several television articles, the home THX theater and rehearsal studio. His clientele included MC Hammer, Felton Pilate, Boz Skaggs, Randy Jackson and Ray Lynch as well as members of Huey Lewis and the News and Journey. He engineered studio projects as well as live performances at every major Bay Area venue from 1975 to 1992, when it “was time for a change” and he exited the entertainment scene for the last time.

A vegetarian since 1969, Warren is an avid target shooter (but clearly not a hunter), a Licensed Texas Investigator, performing data recovery and computer forensics for numerous court cases every year, and possesses a wide-ranging creative style as diverse as his background and interests.

Warren sleeps less than 5 hours a night, proclaiming “There's plenty of time to sleep when you're dead.” He loves to prowl the Dallas / Fort Worth Metroplex in the wee hours past midnight in pursuit of dramatic nocturnal cityscapes. www.nocturnalvisions.net is dedicated solely to his Cities@Night Project. His wife has often suggested he open up a donut shop - or get a newspaper route to fill his abundant pre-dawn free time.

I have been an avid fan of cityscapes most of my life. Since architectural photography is really my first love, that seems natural. Living in Dallas Texas is a real bonus for someone like myself, as we have the undisputed favorite skyline in the world - and I have captured it on numerous occasions.

As with many of my finished pieces, this is a composite of several images taken over a span of about 3 years.

This was captured with...
Wait for it...
A Samsung Galaxy S7
On a moving boat
At night.
That's right. A camera phone. This was a better shot than with the $8k rig in my other hand. Go figure.

Vernazza is one of the 5 fishing villages that makes up Cinque Terre Italy.
2007

A broad cityscape of Dallas Texas - in outline form. Painted in digitally.

This was a project I had wanted to crate for at least a decade, but put off due to the amount of work required. I finally started it after completing a large scale NYC skyline spanning 19 years of photos.

This was exactly what I wanted and I am very happy with the outcome.

A broad graphic cityscape of New York City, featuring the World Trade Centers, Freedom Tower and the blue memorial lights that are displayed every year on September 11th.

This started out as a composite of NYC icons and evolved into this final design over several iterations.

Lots of hours involved but it conveys what I had in mind.

This was a commission piece in 2017 for Delta Air Lines. It is installed in the DFW Call Center and stretches 24 feet wide by 6 feet high.

A composite of Dallas and Fort Worth icons, this little project required re-shooting several highlights and 20 hours of editing. Reunion Tower alone ( the golf ball on a tee) took 2 hours because every single light is placed by hand.

Given the extreme width of most of my skyline work, I decided to "fold" them into circular representations.
This is one of the first in this series.

the icon for this series

This always seemed very Japanese to me, hence the title.

One of my personal favorites.

I love the shadows.

The first of this series and featured in my coffee table book, Texas As I See It

Taking the other-worldly thing up a notch.

Taking the other-worldly thing up another notch.

This would look great over your bed, don't you think?

From my Vortex series of digital art. These are designed to be displayed in a grid.

From my Vortex series of digital art
an homage to DaVinci

A composite image, this was a very small part of a commission by Delta Air Lines in 2017 that took two hours to assemble after the on-site photography that spanned 3+ hours.